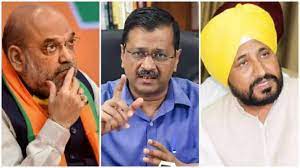 Amit Shah Assures Probe Against AAP To Channi :
February 18, 2022, New Delhi: Amidst the all-time hustle-bustle and tussle between Aam Admi’s supremo and Delhi Chief Minister Arvind Kejriwal and Congress assigned present CM of Punjab Charanjit Singh Sandhu the latest icing to the upcoming Punjab Assembly Election 2022 came from the latter when he directly wrote to the Union Minister of Home Affairs Amit Shah requesting him to take immediate action against Kejriwal who has his direct links with a pro-Khlistani banned outfit. To this direct allegation and ‘action seeking’ letter of the CM, the Union HM gives his cent percent assurance to probe and action on a
fast-track pace.
Amit Shah, on Friday gave his assurance to Punjab CM Charanjit Singh in his letter of response to the latter’s letter for a probe against Aam Admi Party and Arvind Kejriwal for maintain a close knit with Khalistani groups, Home Minister said, “I would personally look into the allegations against the AAP leaders for their ties with banned pro-Khalistani outfit
Sikhs for Justice (SFJ)”. To his official ‘letter of assurance and quick probe’ to Charanjit Singh Sandhu, Union home
Minister stated, “As per your letter, a political party being in contact with and seeking support from an anti-national, separatist, banned outfit during election is a serious matter in the context of national security.
The agenda of such people is no different from the agenda of the nation’s enemies. It is condemnable that some people, in order to attain power, can go to the extent of teaming up with separatists and hurting the unity of Punjab and the country”.
Home Minister Amit Shah further says, “I assure you that no one will be permitted to disturb the nation’s unity. The Government of India is taking this issue seriously and I will personally look into the matter in depth.”
Earlier it is been noticed CM of Punjab rebuking AAP on the basis of his allegation said “Kejriwal either wants to be CM of Punjab or PM of Khalistan”.