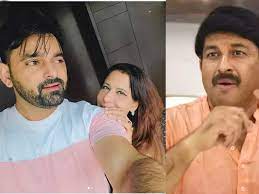 Bhojpuri Superstar actor-turned-politician Manoj Tiwari’s first wife, now ex-wife, Pratima Pandey who changed her name to Rani after marriage, has found another love of his life and is currently dating Punjabi singer Ekam Bawa. The singer made it
public by posting a heartfelt note for her beloved with pictures of them together.
Rani Tiwari, also known as Pratima Pandey, married Manoj Tiwari in the year 1999. After 14 years of marriage, in 2012, both of them chose different paths., after 14 years of marriage both were separated forever. The two have a daughter together named Jiya. Manoj Tiwari got married in 2020 with Bhojpuri singer Surbhi Tiwari. And also Rani Tiwari is the sister of well-known producer and cricketer Arun Pandey, who produced the film ‘MS Dhoni’.

I love u meri jaan my heart beat ” Rani’s boyfriend Ekam Bawa has made this relationship official on her social media account. A few days back, Ekam shared some stunning pictures with Pratima on his social media handle. Along with
the photo, he wrote in a post, ‘Reading the feeling of the heart is a promise to love every moment, a promise to be with you every moment. Never think that we will forget you. There is a promise to walk with you for the rest of your life. I love you my jaan my heart beat.

According to the news published in Bollywood Life, Rani Tiwari and Ekam Bawa have known each other for 2 years. It has been more than a year since both of them were dating. The source confirmed that singer Ekam Bawa and Rani Tiwari are in love. In such a situation, the fans of both are desperate to see this couple unite. The pair of both are looking amazing in the photos. Fans are also congratulating both of them.