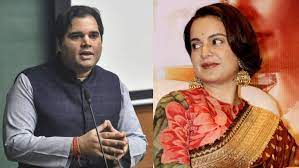 BJP’s MP Varun Gandhi Roasts Actor Kangana
Ranaut : Padma Shri Kangana Ranaut gave a heat argument saying, India did not get Independence in 1947 “but charity”(Bheek)alms. As a cause of this Ranaut receiving negative comments from many, Hence., For this reasons BJP’s MP Varun Gandhi tweeted in Hindi, “Insulting the sacrifice of Mahatma Gandhi sometimes, praising his killer sometimes, and now the disdain for the sacrifices of Mangal Pandey, Rani Laxmibai, Bhagat Singh, Chandrashekhar Azad, Netaji Subhash Chandra Bose and lakhs of freedom fighters. Should I call this thinking madness or treason?”” Varun Gandhi said in a tweet on
Thursday.

Ranaut, participating in the Times Now Summit 2021, remarked India did not get Independence in 1947, rather freedom for the nation came in 2014, in clear reference to the Narendra Modi government coming in power.
The party also demanded that the government take back the Padma Shri bestowed on her recently for “insulting” the country’s
independence movement.
An AAP leader also filed a complaint against Ranaut with the Mumbai Police. Preethi Menon, National Executive Chairman of
AAP, filed a complaint with Mumbai Police seeking an FIR against Ranaut for making “seditious remarks”.
Aam Aadmi Party leader and Rajya Sabha MP Sanjay Singh also slammed the actor, and lauded the complaint made by Menon “The statement of the actress suffering from perverted mentality is a gross insult to the martyrs of the country and her statement is outright sedition. Congratulate Preeti Menon for the historic step,” Singh said.