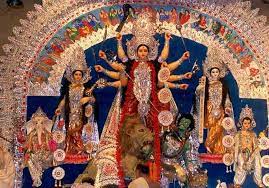 NAVARATRI :Navaratri is a Hindu festival celebrated in different parts of India according to their own Culture
Tradition, and belief which has 9 days of duration and 10th day is celebrated very auspiciously.

In India people have their own story to celebrate Navaratri is has to 2 mythology story :-

2. In the Northern Western states of India, the festival celebrated the battle victory of God Rama
over the demon King Ravana . God Rama killed the Demon Ravana on the 10th day. Before that
9 days God Rama worshipped goddess durga hence is said to be Navaratri ends after 15 days
celebration of Diwali Because after killing Demon king Ravana, God Rama came home back to
Ayodhya with Sita Devi and lakshman .

People of Ayodhya lightenined lamps and invited God Rama from that day celebrate of Diwali begins.

She took avatars to kill demons.

Because demons had boons that they can’t be killed by this God .. So maa parvati has taken different
forms to kill demons

Same way she took avatars of durga to kill Demons.

The 9 days of Navaratri are dedicated to the worship of 9 forms of the Goddess — Shailaputri,
Brahmacharini, Chandraghanta, Kushmanda, Skandamata, Katyayani, Kaalratri, Mahagauri, and
Siddhidatri.

The both festivals celebrated the victory of the good over the evil.

In Karnataka is known by the name of (NADAHABBA). Vijayadashami, the traditional Dasara procession
(locally known as Jumboo Savari) is held on the streets of Mysore city. The main attraction of this
procession is the idol of the Goddess Chamundeshwari which is placed on a golden mantapa (which is
around 750 kilograms of gold) on the top of a decorated elephant.The Dasara festivities began with the
Vijayanagar kings as early as the 15th Century. Therefore, in Tamil Nadu NAVRATRI is celebrated as
Ayudha pooja By worshipping Goddess Lakshmi, Saraswati and Durga devi In Andhra Pradesh Temples
were decked up with lights and flowers and special pujas conducted as part of celebrations. Special puja
was performed at Kanaka Durg .In Kerala as Ayudha pooja or Saraswathi pooja the worship of Goddess
Saraswati — the goddess of wisdom and learning. Books are placed in the pooja rooms (worship rooms)
of houses and temples for worship on the Ashtami day.

Durga Puja is celebrated with great excitement in Kolkata during Dussehra. The festival fills the city with
colour and energy. The city is loaded with decorated pandals, each telling its own story. … The
celebration is concluded with submerging the deities of Goddess Durga in river.

Celebrated extensively by Bengalis, it falls on the last day of Dussehra. The entire state of West Bengal
leaps into a festive mood. Idols of Goddess Durga are worshipped and, at the end of celebrations, are
traditionally immersed into water. In South India, these 10 days of I celebrations are spectacular.

Navratri the festival of happiness , Joy and Victory where our myth beliefs go stronger to Destroy the
evils on your wealth creation journey. The festival of Dussehra marks the victory of good over evil. Lead
a life of patience and perseverance. Creates wide knowledge solves our financial issues, gives our great
victory and teaches us to brave when we are in the worst situation and also gives