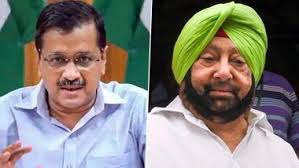 Blaming each other in politics is very common, every leader blames each other for something, recently farmers from Haryana and Punjab are protesting on the borders of Delhi, with this they are showing disagreement against the Farm bill passed by the parliament. In support of farmers, chief minister of Punjab Captain Amrinder Singh started blaming Arvind Kejriwal, current chief minister of Delhi. Earlier this week, Mr Singh had labelled the AAP leader a “coward” and said he would sell his soul if it served his purpose.

The exchange of attacks and retorts between Punjab Chief Minister Amarinder Singh and Aam Aadmi Party chief Arvind Kejriwal over the three contentious agriculture laws continued on Friday. The Congress leader has intensified his tirade against the Delhi Chief Minister as he called him a ” big fraud”. In a statement, he also labelled the opposition parties — AAP and Shiromani Akali Dal — hypocrites, and alleged that they supported the laws initially but after witnessing public anger, changed their stance.

“AAP and SAD MLAs never say what they mean, and vice versa,” Mr Singh was quoted as saying in the statement.

Referring to Mr Kejriwal’s public tearing of a copy of the laws against which farmers have been protesting at Delhi border, Mr Singh alleged the AAP government had notified one of the legislations in the national capital. He accused the leader of “indulging in petty politics over the matter”.

“This shows Kejriwal and AAP have a different face for the people, with totally contrarian intentions hidden inside,” he said.

“What pressure did the centre have on you? Or is it so you can go groveling back to them again the next time your pathetic government is floundering to handle the Covid crisis?” he added.Arvind Kejriwal hit back, declaring that the farm laws were his Punjab counterpart’s “gift to the nation”.

Blaming Arvind Kejriwal Captain Amrinder Singh said you were  part of the committee which drafted these Bills. These Bills are YOUR “gift” to the nation.  Captain sahib, why do BJP leaders never accuse u of double standards the way they accuse all other leaders?” The Delhi Chief Minister had tweeted.Thousand of farmers from Punjab and Haryana have been protesting at Delhi borders against the three laws, which they fear will take away the minimum support price guarantee and will leave them at the mercy of rich corporate houses. The centre says by allowing farmers to sell their produce outside the designated agriculture markets, the laws will eliminate the role of middlemen who often make off with the lion’s share of profit.The centre has assured the farmers in writing that the existing farm markets and the price guarantee will not be done away with. The farmers’, however, insist on a repeal of the laws.Several rounds of the centre-farmer talks have not been able to end the deadlock.

Chandigarh: Punjab Chief Minister Amarinder Singh – locked in a bitter feud with Delhi’s Arvind Kejriwal over the farmers’ protest – lashed out Monday, labelling the AAP leader a “coward” and accusing him of “sell(ing) your soul if it serves your purpose”. He alleged the “pathetic” AAP had notified one of the centre’s farm laws because it had to go “groveling” for help to handle the Covid crisis in the national capital.

“Every Punjabi knows I am not one to be cowed down by any amount of false cases… they also know you will sell your soul if it serves your purpose. The whole world has seen how you sold off farmers’ interests by notifying one of the black laws. Why did you do that?” Mr Singh asked.

This argument heated the relationship between Delhi and Punjab government. Let’s see what happens with the prevailing farm bills and how the government tries to bring the farmers in favour of farm bills. They are continuously trying to convince farmers but the farmers don’t seem to be convinced with this behaviour of the government. Talks with farmer’s leaders are going on , the government will surely come with a solution which will be beneficial for farmers of the whole country.