COVID-19 Vaccine:- Indian Origin couple got a chance to become the first to get vaccinated.

COVID-19 Vaccine:- Indian Origin couple got a chance to become the first to get vaccinated 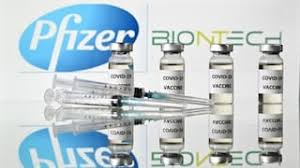 Pandemic is not a new word or term which came to our life suddenly, the world has witnessed so many pandemics in the past times. There is a long history of pandemics. Whenever it comes the world has faced lots of issues such as economic crisis, the migrant crisis, hospitality crisis, losses in business, and a lot, In between all of this, one thing was common for all and that was waiting for COVID- 19 Vaccine. In today’s time, each person around the world wants to be vaccinated. But as it is said some people are only lucky to get anything first. However, a couple of Indian origins became the luckiest to get the doses of the Pfizer vaccine.

An 87-year-old man of Indian origin in north-eastern England and his 83-year-old wife became the first Indian-origin couple on 8th December to be given the Covid-19 vaccine. At a hospital in Newcastle, he was given the first dose of two doses of Pfizer, the BioNotech vaccine.

Dr. Hari Shukla, a resident of Tyne and Wear, was contacted by the National Health Service (NHS) based on the standards set so that he could get the world’s first vaccine. Then his wife Ranjan came forward to get the vaccine as she also comes in the phase of people 80 and older.

Shukla said, “I am very happy that we are finally moving towards the end of this global epidemic.” I am happy that by getting the vaccine, I am fulfilling my responsibility. I feel that it is my duty and I will do whatever I can to help.

Britain’s Prime Minister Boris Johnson called the moment a major development and spoke of V-Day or “Vaccine Day” in Britain on Tuesday. Prime Minister Johnson said that today Britain has taken a big step in the fight against Coronavirus because we are going to send vaccines across the country. I am very proud of the scientists who developed the vaccine, the people who took part in the trial, and the NHS who worked hard day and night to bring it.

The Prime Minister also cautioned that widespread vaccination would take time and urged people to remain vigilant till then and follow the rules of lockdown even in the coming cold months.

Pfizer, BioNotech, received approval from the UK’s Drug and Healthcare Products Regulatory Agency to vaccinate last week, following which the NHS said its workers worked hard to manage the massive logistical challenge round the clock to vaccinate Have been.

The Pfizer vaccine needs to be stored at temperatures below 70° C below zero and can be moved only four times in that cold chain before use.

Due to this pandemic, the life of each and every person ceased inside the house, some of them utilized it in their own way. But some of them have suffered mental pressure and the worst part is each one of us lost something or someone in our life. This vaccine is a relief for the whole world, after coming off this vaccine we can say that maybe we all can get the go freely anywhere whenever we want.