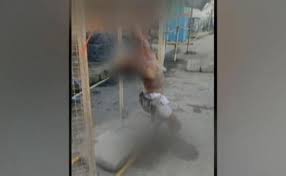 A horrifying murder happened on Friday in took place between Haryana and New Delhi border singhu, which trembled whole India.
A deceased man was found left hand wrist cut off and left leg ,The man was brutally murdered and his body was found hanging from a barricade near farmers’ protest site on Friday morning and also according to the police deceased man was Lakhbir Singh, aged around 35, from Punjab’s Tarn Taran district. A Dalit, Lakhbir was a labourer, is an adopted son, and
is survived by a sister, a wife and three daughters, the eldest of whom is just 12 years old and the youngest eight.

Videos have been circulated and went viral among people showing a large group of men who seem to be dressed as Nihangs – a ‘warrior’ Sikh group – standing around Lakhbir Singh and asking him questions and also group standing over him.
The Kundli police station had received information that “the Nihangs had tied a person to a barricade,” said a Haryana police
spokesperson. The large number of Nihang Sikhs present at the spot did not initially allow the police to remove the body and were also not forthcoming with information about the incident, said the FIR. The body was later shifted to the Civil Hospital for post-mortem. One among them Nihang Saravjit Singh produced before a court Saturday morning after surrendered to the police last evening, claiming responsibility for the murder, and was arrested.

The reason behind the murder is the man allegedly desecrated Guru Granth Sahib near farmers protest area site in Haryana.
Virender Singh, Deputy Superintendent of Police, Law and Order, Sonipat, told The Hindu that his claims were being verified. “He will be formally arrested if his involvement in the murder is established,” said Mr. Singh. The Samyukt Kisan Morcha (SKM), an umbrella body of farmers’ unions leading the protest the front of farmer organisations jointly fighting against the Centre’s farm laws, distanced itself from the incident saying both the parties to the matter — the Nihang group and the deceased person, Lakhbir Singh — had no relations with it.
The group said it abhorred religious sacrilege but nobody could take the law into their hands. The guilty must be punished, the farmers body said, and offered the police its support The police had said the body was found at 5 am, after the local station (Kundli) was alerted. News agency ANI quoted JS Randhawa, Superintendent of Sonipat Police, as saying “vital clues” had been recovered. Earlier Sandeep Khirwar, IGP (Rohtak Range) told ANI a forensic team examined the area. Inspector General of Police, Rohtak Range, Sandeep Khirwar, told The Hindu that there were several claims and counterclaims with regard to the involvement of a certain religious group, but he could not confirm anything as of now. “The matter is under investigation. The
police will go by the evidence. We are trying to get hold of a few suspects and the sequence of events would become clear after they are questioned,” said Mr. Khirwar. He added that the deceased had injuries inflicted with a sharp- edged weapon and the death was probably due to “loss of blood and shock”. Although Nihang warriors have frequently been seen around the Singhu main stage area, farm leaders said they had no official role and had never been a part of the meetings or decision-
making of the movement. “You must understand that this is not a kisan group. The Nihangs are a religious group, not a farmers’ union. They have a separate camp, and the incident has happened within their own camp,” said All-India Kisan Sabha general secretary Hannan Mollah. He also warned against attempts to link the murder to the SKM, calling it a “conspiracy”.
Bhagwat Singh, a Nihang, claimed it was not possible to identify who killed the man as everyone was angry and he was killed at a movement and they are ready to co-operate with the police in the investigation.
Earlier, Haryana Chief Minister ML Khattar, who was due to visit Sonipat this week, had said “action will be taken”. Mr Khattar held a meeting at his residence in Chandigarh – attended by Home Minister Anil Vij and the Haryana Police DGP – to discuss the killing.