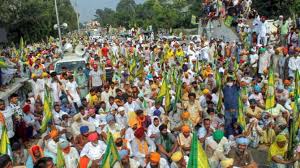 What will you do when an empty land with fertile soil and a bunch of seeds is given to you? Surely you will grow a crop of your choice on it. If it is that easy then why we all are not farmers today. Farmers are those who feed the whole nation with their hard work, just imagine what will happen if there are no farmers the life cycle of each one of us is connected with each other. A single person and profession play a vital role. More than 45% of the population depends directly on agriculture and more than 15% are indirect which means a total no. of more than 60% population are directly dependent upon agriculture. A single problem to them can create chaos in the life of that 60% of people. In September 2020 for the betterment of farmers, a farm bill was introduced. But if it is for their well-being then why since September the anger against the three central farm legislation has been simmering.

Today is the fifth day of the protest, for the last four days thousands of farmers from Punjab, Haryana, Rajasthan, and Uttar Pradesh have been marching towards Delhi. As they were not able to get support from the state government the farmers have decided to create pressure on the union government, due to which they all headed towards Delhi. While in UP and Haryana the BJP government was not able to convince the farmers. On the other side the government of Rajasthan and Punjab has fully supported the farmer’s perturbation. Farmers are demanding the union government to withdraw the three legislations or else they want them to introduce the new law which ensures the minimum support price (MSP) for their crops.

Why Delhi Chalo? Why farmers are protesting?

They believe that this law will open the sales and marketing outside the agriculture produce market committee (APMC) mandis which are controlled by the government, remove the inter-state barriers. Since the government won’t be able to charge taxes the mandi system will be finished, the abolition of APMC will lead to the exploitation of farmers by the big corporates. The protest is mainly for the MSP, it is something which ensures farmers the fixed rates for their crops. As more than 85% of the farmers have less than 2 hectares of land which is why these farmers believe that the abolition of MSP and the end of the mandi system will create problems for them. But in the amendment, such things are not mentioned government has assured that the MSP system would stay.

What can happen now?

The farmers are not in a mood to turn back, they are carrying a ration which can last a month. This shows their determination for entering Delhi and camp there any forcible action taken by the state can lead to a major law and order disruption.

The police have already used water cannons and tear gas to scatter the group of farmers but this was also failed.

On Sunday late at night farmers decided to stay at Delhi- UP border. Many of the farmers were seen sleeping on the road and some of them were seen in a group around the bonfire due to the cold weather. The protest against the central government’s farm law still continues.