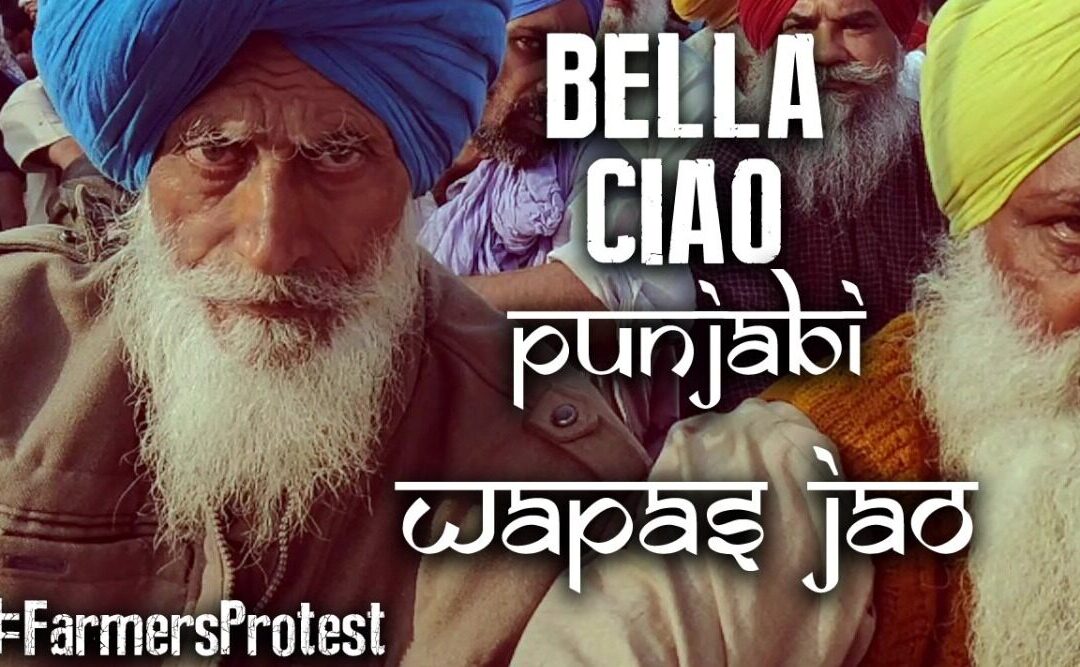 Bella Ciao, the anthem of resistance across the world, now has a Punjabi version that echoes with the sounds of farmers protesting.

Poojan Sahil, a 27 year old created the song and he can’t be nuch happier at its popularity amongst the people.

The video of the song reached 2.7 lakh views on YouTube in a very less time and is being widely spread across different social media platforms.

Sahil is a Maths teacher in Delhi school said “fear, abuses and disappointments” are par for the course for a socially conscious musician but it all seems worth it if his words give strength to the thousands of farmers who have been protesting for the last month to demand a rollback of the three new agri laws.

“I have a parameter for my songs. As soon as I start getting abuses on the YouTube comments I understand it has become slightly popular and has moved out of the usual echo chamber! For this song it happened in less than 24 hours of uploading it,” Sahil told PTI.

He had created a Hindi version of “Bella Ciao” during the anti-CAA protests earlier this year and knew the song, which returned to the popularity charts through Netflix”s popular drama “Money Heist”, would resonate with the youth.

“I had already created a ”Wapas Jao” (Hindi version) of ”Bella Ciao” during various student protests in India and it was received well. It was then also used for the CAA protests a number of times. I realised the youth connects to it and obviously ”Money Heist” has helped in that. When the farmers” protest began, I thought it would fit well, given the history of the song,” Sahil said.

Bella Ciao” (Goodbye Beautiful) originated in the late 19th century in north Italy with women peasants singing it in protest to the harsh working conditions. The Italian resistance song was also used by members of various anti-fascist groups against Benito Mussolini during the Second World War. Over the decades and years, it has cropped up in protests around the globe, be it Greece, Tunisia or France.

Sahil said the popularity of the Hindi version of the song during the anti-CAA protests inspired him to come up with the Punjabi lyrics. “I think the melody of the song is truly timeless,” he said. The Punjabi lyrics of the song – the video by ”Karwaan-e-Mohabbat”, a civil society campaign for social harmony, has sweeping shots from the protest grounds near the border areas of Delhi — talks about how farmers have left everything behind to protest against the new farm bills.

“We have left all inhibitions behind/Singing O merciless/ Go back, go back, go back/ every grain of the soil sings in chorus/ O merciless go back,” say the lyrics, which are not the translation of the original but a rendition in Punjabi.

Asked about being a creative, socially conscious voice in contemporary times, Sahil said it is a “taxing experience”. “It is a very taxing experience to be honest with the fear, abuses and disappointments that have to be faced regularly. However, when it feels like the movement and the people struggling are gaining some strength and hope through our words and music, it seems all worth it,” he said.

The lyricist-musician-singer has also reprised many classics, including “Woh Subah Kabhi to Ayegi”, Faiz Ahmed Faiz”s “Hum Dekhenge” and “Muhabbat Zindabad” from “Mughal-E-Azam”. He said he tries to be hopeful about the future through these songs. “… These songs of hope are also like the conversations I am having with myself to keep the hope alive!” Sahil said, adding that he is inspired by people around him, family, friends and “everyone who keeps trying in their own way to work towards a better tomorrow”.

Enacted in September, the three farm laws have been projected by the central government as major reforms in the agriculture sector that will remove the middlemen and allow farmers to sell anywhere in the country.

However, the protesting farmers have expressed apprehension that the new laws would pave the way for eliminating the safety cushion of Minimum Support Price and do away with the mandi system, leaving them at the mercy of big corporates. The government has repeatedly asserted that the MSP and Mandi systems will stay and has accused the opposition of misleading the farmers.