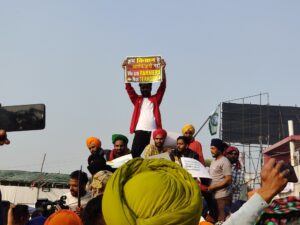 The Indian Farm Reforms Bill (2020) was passed on 27th September, which on paper would help farmers to have multiple marketing channels and contract farming. The law that doesn’t clearly mentions about MSP (Minimum Support Price), is being staunchly protested against. Farmers, who have been braving the cold and the pandemic, are standing firm on their stand, until the law is repealed. However, till this day, more than 20 farmers have lost their lives, braving cold and the contentious law.

As two freelance journalists, we decided to cover the ground reality of singhu border. We will walk through the timeline.

How to reach the Singhu border:

A mtero till Jahangirpuri, followed by a cab or an autorickshaw will do the need. A little walk till the barricades, here is what we saw.

‘We bring medicine for one or two days but people leave more than what we bring’:

As soon as we entered the protest site, we saw a medical camp. There were nihangs sitting inside the stall offering free medicines and water bottles. On asking from where did they manage the essentials, Dr. Kuldeep Singh, a nihang, said, ‘we bring medicines for one or two days from Punjab but people anonymously drop big stocks of medinces for us,’. Kuldeep, a docto, has practiced in US for 11years. However, he returned to Jalandhar to help people. They also gave us water bottles and ORS packets.

‘I came here to support my father and brothers’:

A student of class 8th, named as Veer pratap from Anandpur Sahib joined protest with his father and brothers who are farmers. He joined the protest with his wish and will, who had enough knowledge about the bills. Veerpratap had to leave his studies to take part in the agitation. He plans to resume it once the govt takes back the bill.

‘I want to give UPSC CSE exams’, he expressed with a lot of clarity and confidence.

Walking through the Singhu border, the barbed wires and security forces are uptight during their duty. Crossing it, a series of mobile toilets have been installed by the Delhi State govt, all dysfunctional without basic needs like water. The waste accumulation at the site has become alarming ans concerning. ‘We are helpless. This is our plight.’ said Lakhbeer Singh, a farmer who has travelled from Ludhiana to Delhi, 4 days ago.

On asking about what the Delhi government in particular done to ensure the basic cleanliness and necessities on the site, the farmers had a unianimous denial collectively.

‘If the government would have heard us, things wouldnt have been this ugly. We would not have had to leave our homes and stay here in cold. However, our people are doing the maximum here to ensure all sorts of basic necessities to comofort,’ said Harvinder Singh, another farmer from the same district.

Women of Punjab at protest:

We saw a woman in her early 20s distributing a local punjabi paper named ‘Sirjhan Hathara’. Jasveer kaur, anMcom student from punjabi university said, ‘I am here with my kafila to educate and help farmers about their rights. Our paper has information to let farmers raise their voice and be a part of this peaceful protest. The sections of our paper includes ghazals, poems and history.’

We also met a group of woman chopping vegetables for langar. They belonged to Punjab and Delhi with their kids to help farmers.’We came here to help our farmers as I am a daughter of a farmer’, said Kuldeep kaur from Delhi.

‘All of you are welcome to join and eat food, as much as you want. We farmers are here to feed you’, said a 70year old lady.

‘We left our kids at home to take care of home as we joined protest here. We will not go back even if we have to sit here for a year,’ said a 45year old farmer who is a mother of three children.

Role of MalerKotla Muslims in the protest:

‘Muslim federation and join action committee named as muslim brotherhood from Malerkotla in Punjab joined hands together to provide Langar sewa for their sikh brothers in the protes,’ said Mr. Mukarram Saifi, a member of muslim federation.

Also various journalists, activists, poor children, beggars, police men and many other people are fed by the farmers via langar in the protest.

Delhi Malayalis show their support: Walking through the borders, few Malayalis from Delhi were also seen taking part in the protest, conveying their solidarity to the farmers. Thomas Daniel, a good samaritan and a journalist feels that he wanted to see and check the intensity of the protest from the ground level. ‘We wanted to have a look at both the aspects of the problem and that is why we are here today,’ explained Daniel.

E.M Shaji, another malayali, who works as a security guard at St Stephens’ hospital in Delhi was one among them. ‘ We dont want our farmers to come to the street and fall prey to more hunger and exploitation. This law is draconian. Our farmers are protesting in this bone chilling winters and this agitates all of us. This is being done only and only for the benefit of powerful private players. We are hereby trying to convey our sheer disapointment and angst through your medium,’ expressed Shaji.

Moving further metres, farmers from Haryana were also in the frontline, dissenting the contentious farm bill. One such farmer is Vinod Godara. He thinks that ‘APMC’s are in threat’. ‘ I own land of 35 acres in Sirsa. If mandis are taken back, our crops will not be sold and farmers of our village will have to live with immense loss,’ Godara said.

When asked further about the meetings held by the agricultaral minister with farmers, the lack of trust seem to deepend the crisis.

‘Government had promised us a lot of things. However, the promises were not kept. Our Chief Ministers have also been lying to us. Untill and unless we dont get a reliable source of affirmation from the govt, the protest shall continue,’ Godara added.

Everyobody comes under the banner of farmers’:

The All-India Kisan Sabha leaders were seen attending speeches carrying red flags and posters of Bhagat Singh. ‘We have been a part of AIKS for the last ten years. Today we are all under one banner that is the farmer’s. This is a united movement for farmers and labours,’ said Harmanth Singh, an AIKS leader and farmer from Hoshiyarpur.

‘There is no left, right or centre here today, We have to save the farmers and agriculture, that is our goal. However, you will not see people from Bhartiya Janta Party or even Congress leading the protest. The Left you see here is fighting for the farmers, common people and not for its own benefits,’ Harsman Singh explained further.

The chances of left parties elevating the movement is not a breathe of fresh air. The parties have been in forefront in the fight for labours and farmers’, expressed the AIKS leaders. ‘The one who fight for the people, would always come in the vanguard. Movement will ultimately happen. People will see it and choose their sides eventually.We are fighting with all our vigor and valor,’ said Rakhbeer, a farmer and AIKS member.

‘Fundamentalism is the path of destruction’: on being called as Khalistani terrorists:

The Punjabi Sikh protesters initially and still are being targeted in the name of Khalistani seperatist terrorists. When the question of the same aquisition was thrown to them, Rakhbeer Singh said, ‘ We do not want Khalistan. Whichever country has been made in the name of religion is in the path of destruction. Our neighbouring country is the biggest example of it. So is the whole idea of Hindu rashtra and Khalistan. Secularism is the only way of development,’ concluded Rakhbir Singh.

‘No Farmers No Food’

The voluntary works are being carried out by numerous organisation such as Khalsa Aid and Sikh Seva force. There are langars being served by everybody for everyone who is hungry. ‘No Farmers, No Food’, read the banners and posters on the cite.