“You Eat Your Food, We’ll Eat Ours”: Farmers Refuse Lunch with Ministers 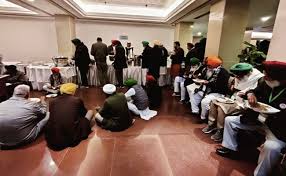 “You Eat Your Food, We’ll Eat Ours”: Farmers Refuse Lunch With Ministers

Farmer reps protesting the centre’s agriculture laws refused to share a meal with Union Ministers Narendra Singh Tomar, Piyush Goyal and Som Prakash during the seventh round of talks today, declaring: “You eat your food and we will eat our food”

Photographs from inside Delhi’s Vigyan Bhavan, where the talks were held, showed farmers sitting on chairs (and others squatting on the floor of the hall) with their lunch laid out on a nearby table. There was no headway in the talks and the next meeting will be held on Friday.

The luncheon break in each round of negotiation between the farmer leaders and the centre had emerged as a relative indicator of progress in resolving the weeks-long stand-off.

Last week headlines were made after the two sides agreed to break bread together.

Agriculture Minister Narendra Singh Tomar and Railways Minister Piyush Goyal were invited to share in the farmers’ langar. Visuals showed the ministers being served rotis with lentils and vegetables.

Images of that lunch were widely seen as a soft breakthrough in discussions that have stalled over the farmers’ core demands – scrapping of the agriculture laws and a legal guarantee for MSP.

The mood soured by day’s end though, with the two sides still unable to agree on core issues.

The centre said it would not consider taking back the laws (calling the process “long and arduous”), but once again offered to form a committee to discuss these outstanding demands. It also offered farmers’ a written guarantee for MSP, as opposed to the legal one they have been demanding.

The farmers, who have repeatedly rebuffed both proposals (last month sources quoted union reps as saying “now is not the time for a committee”), said “we won’t take back our movement”.

Despite the continuing gulf between the two sides Mr Tomar later told reporters the meeting concluded on a “very good note”, as he announced an “agreement” on two of four demands.

He said an amendment to the Electricity Bill would be withdrawn and that penal provisions for stubble burning would not be applicable to the farmers. However, both issues were seen as being already settled, with the centre having already indicated that it will accept these demands.

Tens of thousands of farmers across the country are up in arms over three laws passed amid chaos and pandemonium in September. They say the laws will deny them guaranteed prices (MSP) and leave them at the mercy of corporate firms looking to move into the agriculture space.

The centre, however, insists the laws are beneficial since they allow farmers to eliminate middlemen, and sell their produce at markets and (potentially higher) prices of their choice. Farmers were earlier bound to local and government-controlled wholesale markets, or mandis.