Is the mass media is violates consumers’ privacy rights? 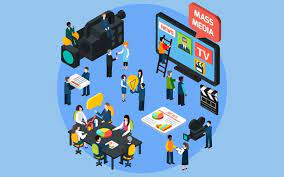 Is the mass media is violates consumers’
privacy rights??
At present situation, People expect for privacy which means to say that they have separate rule for themselves and isolate
themselves for maintaining peace within them but…. MASS MEDIA which sometimes ruins there privacy in many ways.. We
will look in what way MASS MEDIA ruins our privacy
What is MASS MEDIA ?
MASS MEDIA a platform where people communicate with more number of audience in Nano seconds . Via Television,
Radio, Social media, Magazine, News paper etc., As the Development takes place in the society even people
adopt to the new technology use it for fame purpose. Consumer privacy is information privacy as it relates to the
consumers of products and services and also which deals with variety of social, political issues , business and more of people
who is in the fame society and also social media . How social media violates our privacy?
As a single person starts to shrink with the society starts to communicate with people for expecting the Standard. But by
joining into the social media and other sources right to privacy gets affected in various ways.
Communications and media law encompasses all legal issues affecting the media and telecommunications industries. These issues include free speech issues, defamation, copyright, and censorship. There are also issues involving privacy and whether
content may be printed, broadcast over the air, or published online.
By Using sources in social media fraudsters can trick in Financial way by threaten you, crimes takes place, personal information can be stolen Development of technology.
From toddler to late adulthood , from daily wage to business man all are in involved in social media . Social media sites like
Facebook, Instagram, Twitter, YouTube, Snap chat. Mostly the youths are involved more in the social media. This involvement
may have positivity and negativity outcomes. Right To Privacy Privacy, is what all expect for .. the state of being secure from
third parties eye on our personal information Impact Of Social Media On the Right To Privacy
Social media is basically a form of communication via the internet. The major social networking sites are Instagram,
Facebook, WhatsApp, etc. The users of these social networking sites were untroubled until the coming of the 1990s. This was
when the cyber crime was uplifted.
If suppose we fail to protect your personal information from online hackers or fraudsters can damage caused . These scam

can be for making fake passports, PAN cards , the cases of sexual predators, cyberstalking, defamation and identity thefts
have come into huge number of cases. It also noted that present generation youth fall in to such prey to the
cybercrimes the most. Because of the Lethargic mindset and fraudsters use and take Liberty out of it .
Social Media and Privacy Related Laws In India Social media finds only a mention in Section 79 of this act. This
section clarifies that if any person posts or uploads anything derogatory to some other, then the medium on which it is
posted, that is Twitter, Facebook etc., is not to be held liable for the acts of such person.
The individual has a “right to privacy” which is guaranteed in Article 21 of the Indian Constitution.
Union of India case, 2017, the Right to Privacy was declared a fundamental right by the Supreme Court. Right to privacy is
protected as an intrinsic part of the right to life and personal liberty under Article 21 and as a part of the freedoms
guaranteed by Part III of the Constitution Some guidelines can be followed …
Using strong passwords so that no-one could find it Change your passwords regularly Ensure that you have updated security software.
Do not open suspicious emails. Do not share your password
“do not call” lists; Verification of transactions by email Passwords and other authorization measures;
Encryption and decryption of electronically transmitted data If there is any other things please give a complaint to Cyber
crime A journalist should avoid publishing details and other gossips about someone’s private life that will humiliate them in the
society. News-gathering activities may violate a person’s right of privacy if the journalist unwantedly publishes fack news
(physically, electronically, or otherwise) Journalist must keep up there principles were publishing news
Conclusion:
We all are social human being use social media and also give more concentration on our privacy. Even though various apps
Various settings we are not make ourselves give guarantee for our privacy .. We must develop friendly environment instead of
leaving in the posh world.. where all judge us only by our assets . To protect our privacy is our responsible.