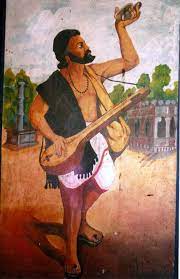 KANAKA DASA:
Kanaka Dasa (1509 – 1609) was a Haridasa(Saint) and well known composer of Carnatic music, poet, philosopher and
musician from Karnataka . He is well known for his keertanas ( devotional songs) and ugabhoga (type of vocal piece in Carnatic music, compositions in the Kannada language for Carnatic music. Kanakadasa jayanti is celebrated as his remembrance of his great poet, saint, philosopher, composer and music. Kanaka Dasa full name Thimmappa Nayaka
born in the year 1509 on December 3rd .He belonged to a shepherd Kuruba caste born in Bada village , Shiggaon. Vijayanagara Empire presently Haveri district , karnataka India . His parents were Biregowda and Beechamma. He was a warrior at Bankapur fort When he was a young man, he was defeated in a battle and mortally wounded, but he was miraculously saved which led him to the path of spiritual life. He was a poet-composer, a religious and social reformer, and a devotee of Lord Vishnu. He was the disciple of Vyasathirtha Swamiji . One day, Vyasathirtha requested Kanakadasa to visit him in Udupi . But he was not let to enter the temple by the Brahmin priests decided that kanaka Dasa belonged to a lower caste.
Even after Vyasathirtha asked them to let him in and offer his prayers Brahmin Priests disagreed. Kanakadasa camped outside the temple and started composing songs and poems. He also started meditating and singing his compositions for his favourite
Lord krishna .The entire city- it thus happened that the outer wall of the temple cracked, the temple wall fell down and Lord
Kirshna’s idol turned around to face Kanakadasa and it is said that kanaka Dasa lived in small hut later changed into shrine.
Although many saints such as Purandaradaasa and Vijayadaasa visited Udupi and were devotees of Lord Krishna, it
is Kanakadaasa’s association with Lord Krishna, that conveys a deeper meaning. According to a legend, while carrying out
excavation in Bada, Thimmappa found a large treasure chest of gold, which he used for the cause of people. After this, people
started calling him by the name Kanaka (golden) Nayaka Kanaka became a hermit and called himself Kanakadasa.
WORKS OF KANAKA DASA: Kanakadasa wrote about two hundred forty Karnataka Music compositions (Kirtane, Ugabhogas, padas, and mundiges or philosophical songs) besides five major works. His compositions are published in many languages.
Nalacharitre (Story of Nala) Haribhaktisara (crux of Krishna devotion) Nrisimhastava (compositions in praise of Lord Narasimha)

Ramadhanyacharite (storyKanakadasa has composed many Kirthanas with a pen name Adikeshava.
Kanaka Dasa’s literary works gave stress to those present day of caste system Condemned caste system through poetic .
His beautiful lines which describes the devotion towards God Is glorious. Kanakadasa Jayanthi is a festival celebrated
by people of Karnataka and Kuruba community in particular. It is celebrated every year on the birth anniversary of the
great poet and saint shri Kanaka Dasa. In tribute to the great saint, the Government of Karnataka has declared the birthday of
Kanaka Dasa as a state holiday. All the government offices, schools and colleges around the state celebrate the birth anniversary of Shri Kanaka Dasa as a tribute to one of the great social reformers of Karnataka
Kanakadasa Jayanti is a regional public holiday in the state of Karnataka. It falls on the 18th day of the Hindu month of Kartik
each year.