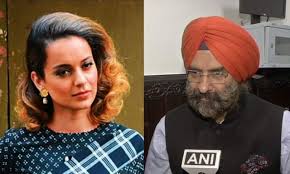 Kangana Ranaut always expresses her feelings through her tweets. But due to this she also appears to be putting herself in trouble. Recently, she had a confrontation with Shiv Sena, and once again by opposing the farmer’s protest Kangana has created trouble for herself. Nowadays Kangana’s encounter with the stars of the Punjabi industry is being seen on social media.

Ever since Kangana has posted a derogatory tweet targeting the elderly woman who is doing the protest, since then, she is being attacked from all sides. Now a legal notice has been issued against Kangana by a member of Delhi Sikh Gurdwara.

Kangana’s derogatory tweet calling elderly women available in Rs.100. Has given birth to an ugly war of word on Twitter. She opposed farmer protest and called them ‘anti-national’, for disrespecting farmers and elderly women. Diljit slammed her by giving a mouthful in Punjabi.

A day after sending a legal notice to the actor, Manjinder Singh Sirsa chief of the Delhi Sikh Gurdwara Management Committee (DSGMC) said Ms. Kangana Ranaut should give an “unconditional apology” within a week. However, Ms. Kangana posted a photo of another octogenarian woman and stated that she was Ms. Bano, she even suggested that she could be “hired” for Rs.100 to attend protests. This tweet was done when on Tuesday Delhi police stopped an elderly lady from joining the farmer’s protest. The aged woman Bilkis Bano became the face of the months-long protest held in Delhi’s Shaheen Bagh against the anti- citizenship law.

A legal notice was sent to Ms. Ranaut by a Punjab- based lawyer, Harkam Singh. The reality about the woman is that she is not fake her name is Mahinder Kaur wife of a farmer Labh Singh Nambardar and she belongs to Bathinda. Ms. Ranaut’s attention was drawn by DSGMC to how she gathers support from her fans through the use of social media when a part of her office in Mumbai was demolished, she claimed that her fundamental rights were violated. Considering this DSGMC said that “under the constitutional rights the farmers have the right to protest peacefully she cannot claim a right to demean and insult them.

According to the legal Sikh Gurdwara Management Committee-

Now we need to see how does she react to this notice, she will stick to her point, or will she go back and apologize. It will be known in the coming time; due to this ruckus she has deleted the tweet. Right now, the Sikh community is not in the mood to forgive her.

After Thursday’s meeting with the government were, they failed to end the deadlock over the new farm laws. Tomorrow the third round of meeting with the center will be held. At least 40 farmer’s leaders are meeting at the Delhi -Haryana border for their next action.