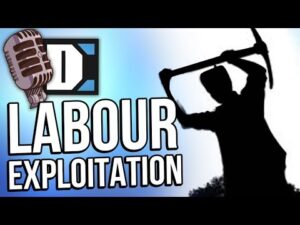 In today’s world where there are numerous things occurring, therefore the word ‘exploitation’ has become an alarming topic to scrutinise deeply. Every sector of the society if properly examined in depth is somehow would be discovered that the practise of exploitation is taking place. Isn’t an employer exploited? Isn’t a teacher exploited? Or major cases, how far a labour is exploited?

Victims of labour exploitation can be of any sections or age group of male, female, or children. But irrespective of their discrimination in race, creed or age, some sections or group are highly taken advantage of. Migrants are the common prey to labour exploitation. Migrants are unknown to the place, friends or often have to get defended on their employer. Other people who gets victimised are those who are in financial crisis and thus get into heavy debts and gets bonded of it. They r forced to work to pay off their debt. There are also victims who are human trafficked into their own country or some other.

SEXUAL EXPLOITATION :- Sexual exploitation is a type of labour exploitation. It includes forcefully or trafficked individuals to work in sex industry such as online sites, brothels, sex entertainment industry or bars. Victims of sexual exploitation can be of any gender, age or caste. Majorly, women or girls fall prey to this industry.

Labours are exploited by following ways: –

There are cases like labours are forced to work for long hours like 16 to 17 hours a day with only one short break. It is exploitation in their human rights of normalcy working. They are also not paid for their extra work.

Several times, the workers are not paid their minimum wages too. Mostly, they are considerably underpaid. There are given no remuneration for their overtime work. The employers exploit them by incurring several charges and cutting their salary as a fine.

Most of the labours lack a proper housing. They stay in a degraded, unhygienic place which affects their physical health. They were also incurred a huge sum for a minimum place to stay.

The labours always had to endure stress, abuse, blackmail and punishments. It affects their psychological and physical health. A lot of these conditions endure one labour to suicide too.

According to the reports of ILO, 40.3 million people are victims of modern slavery globally, while 24.9 million people are affected by forced labour. There is a serious need to eradicate the practice of labour exploitation. Several organisations have started movements to aware labours about their rights. Several individuals, governments are doing their best to eradicate the virus of labour exploitation from the society.