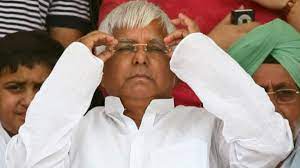 Lalu Prasad was called ‘Harishchandra’ if He had Shaken Hand with BJP:
Tejaswi Patna, February 21, 2022: Former Bihar Chief Minister and RJD Chief Lalu Prasad Yadav were given a sentence of 5 years imprisonment by the CBI Court on Monday in the Fifth Fodder Scam.
Tejaswi Yadav, chief of RJD and his younger son reacted said about the conviction and the sentence “BJP is after Lalu Ji because he refused to shake hand with the party. If Lalu Ji had shaken hands with BJP, he would have been called Raja Harishchandra. But he is fighting against BJP hence he is facing imprisonment. We will not get scared with this.
“Lalu Ji said he would never bow down to the BJP”, Tejaswi further stated.
To emphasis more on his dismay against the sentence given to Lalu Prasad by the CBI Court
he said that CBI must have forgotten other giant scammers who are living under the sky in open air. He mentioned names of Vijay Mallya, Nirav Modi and Mehul Choski and how CBI, ED, NIA acts indifferent in other scam cases. “Apart from the fodder scam it seems like no other scam has ever happened in this country. In Bihar almost 80 scams happened but where
is the CBI, ED, NIA? The CBI has forgotten Vijay Mallya, Nirav Modi, Mehul Choski.” said the Junior Yadav while speaking about the bigotry going on in law enforcement system.
He further adds “We would move to the High Court against the verdict. There are still High Courts and Supreme Court. I believe the verdict in the higher court will be in favor of Lalu Ji”.
Adding fuel in the fire the RJD Chief said “People of Uttar Pradesh and Bihar are watching the way BJP is treating Lalu Ji. The people of UP will give answer in the elections.”