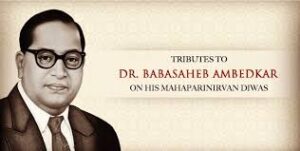 December 6, 2020, marks the death 64th death anniversary of Dr BR Ambedkar, the chief architect of the Indian Constitution. The social reformer, economist, thinker, politician and the first Law Minister of Independent India, Bhimrao Ramji Ambedkar breathed his last while in his sleep and is paid tribute to on this day, regarded as the Mahaparinirvan Diwas.

What is Mahaparinirvan Diwas?
The term ‘parinirvan’ has a deep meaning in Buddhist traditions and refers to someone who has attained nirvana in his lifetime and after death. December 6 is observed to commemorate his unfathomable contribution to society and his achievements. Millions of people and followers assemble at the Chaitya Bhoomi (Dadar Chowpatty Beach in Mumbai), on this day.
His relentless effort in shaping the Directive Principles, the formulation of the Reservation system for the upliftment of the backward sections of the society, the voicing of the equal right of the Dalits Buddhist have earned him an irreplaceable position in Indian political history.
All about BR Ambedkar:-
Born on April 14, 1891, in Madhya Pradesh, Ambedkar, had done his education at Elphinstone College under Bombay University, Columbia University and then completed his Bar course from London School Of Economics.
A revolutionary freedom fighter, Ambedkar had led from the front along with Jawaharlal Nehru and Gandhi and played a pivotal role in the upliftment of the poor and backward classes of the society.

Dr BR Ambedkar was awarded the Bharat Ratna, the highest civilian honour of India, posthumously in 1990.