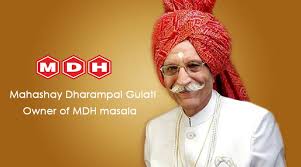 ‘Mahashay’ Dharampal Gulati, the owner, and CEO of the iconic spice masala brand MDH (Mahashian Di Hatti) just two years short of a century passes away on Thursday at the age of 98.

For the last three weeks Dharampal Gulati “The King of spices”, was undergoing treatment at Mata Chanan Devi Hospital in Delhi. On Wednesday night his condition got worsen and on Thursday morning because of cardiac arrest he passed away.

Dharampal Gulati’s ( Mahashian Di Hatti) MDH for nearly seven-decade till now is ruling the kitchens in India. All of us grown-up listening to the MDH masala jingle- “ Asli masala sach sach, MDH…MDH”. Fondly called “Dadaji” even in his nineties, he was actively involved in the functioning of MDH masala he became the iconic face of MDH and considered the oldest star in the world.  Last year a lord of masala was awarded India’s third- highest civilian award Padma Bhushan.

The story behind building the spice empire.

Dharampal Gulati was born in Sialkot, Pakistan, in 1923 he dropped out of fifth grade and joined his father, Chuni Lal’s spice business. After partition, he moved to India with only Rs 1,500 in his pocket. Today, that 1500 has built an empire of Rs.1500 crore this masala company runs about 20 schools and a hospital.

In the starting days, he did a humble beginning and bought a tanga for Rs 650 which he ran from the New Delhi railway station to Qutub Road. with his father’s help, he also tried his hands at several other businesses too, started with soap, carpentry, cloth, hardware, rice, etc., but nothing worked. When he wasn’t able to succeed, he started working in his father’s shop named ‘Mahashian Di Hatti’ popularly known as “Deggi Mirch Wale” people. Eventually, they earned enough money to buy property at Delhi’s Karol Bagh where he opened a spice shop. As the business started to grow the company started advertising it on television. MDH is selling 62 products in over 150 different packages and shipping them worldwide.

Some unknown fact about the spices legend.

He was known as the king of spices for a reason. His journey inspires most of us, being a school dropout didn’t become an obstacle in his journey of success. In 2017 Gulati became the highest-paid FMCG (fast-moving consumer goods) in India.

At this age, he used to get up at 4:30 and involved himself in physical activities like exercising early in the morning.

He was a warrior, he also fought with the novel coronavirus. Most recently, he donated 7,500 PPE kits for health care workers. And also donated an undisclosed amount to the Delhi CM relief fund. 90% of his salary used to go to charity.