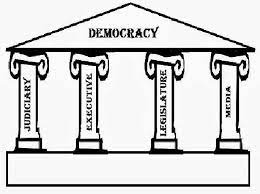 MEDIA-THE FOURTH PILLAR OF DEMOCRACY:
“The people will believe what the media tells them they believe.” – George Orwell

India is a vast country with rich heritage whereas., population is 1.39 billion estimated in 2021. India is considered as the largest democratic country all over the world., due to its wide diversity, its proper functioning is based upon three main pillars namely: .
legislature ,executive judiciary and the press. -But in actual terms, Media is considered to be the fourth pillar to operate the Indian .Shri Naidu said that each pillar must act within its domain but not lose sight of the larger picture.
four pillars of Democracy
1.legislature:-The main and the most important function of the legislative assembly is formulating laws according to the needs of the state. There are discussion and debates on the implementation but the final power is concentrated in the hands of the legislature over lawmaking.
2.Excutive:– Executive power is vested in him and all executive actions are taken in his name. He is, however, only a Constitutional Head of State acting on the aid and advice of the Council of Ministers and as such only the formal Executive. The head of executive is the president.
3.Judiciary:– The liberty of the press is the palladium of all civil, political, and religious right. Press is the fourth pillar of democracy, which exercises this right of freedom of speech and expression. The rights originate from the US constitution.
4.Media:-Media has given political parties the tools to reach large numbers of people and can inform them on key issues ranging from policies to elections. In theory, media should be seen as an enabler for democracy, having better-educated voters would lead to a more legitimate government.
MORDERN MEDIA:
Modern media comes in many different formats, including print media books, magazines, newspapers, television, movies,
video games, music, cell phones, various kinds of software, and the Internet.
How media works?
According to democracy the media is a watchdog , media must watch the three pillars of democracy where as a media can change the fate of a person with a pen as novelist and writer Edward Bulwer-Lytton said “ pen is mightier than the sword” . Media A journalist’s heart and soul is modesty and morality;
propriety and purity. A Journalist must give trustworthy information should be very honest and punctual and also should give clarity , Journalist must not give false messages to people.
Media losing it’s credibility:-Nowadays media is losing its credibility because there is a unhealthy practice between journalist and media and also the values, ethics and ,perspective mission are slowly vanishing from the journalism , The channels and newspapers have seized and captured their stand for supporting the political parties and religion. Whereas people started lose there faith on media.
Responsible of media:– Media should be responsible, if the media loses its credibility the entire blame will be on the fourth pillar of democracy ., media must give the accurate information without hiding the truth and truth should be revealed . There
should be crystal clear information given to the people were as the media works as the voice of the people.
Principles of journalism:
Truth and Accuracy, Objectivity, Impartiality, Fairness, Public opinion , Accountability, and Impartiality, Humanity.
Media Ethnics: Censorship ,Privacy, Access to information, collect the information accurately, Copyright
Law for media Article 19(1) Freedom of Speech and expression: Freedom of Speech and expression means the right
to express one’s own convictions and opinions freely by words of mouth, writing, printing, pictures or any other mode. It thus includes the expression of one’s idea through any communicable medium or visible representation, such as gesture, signs, and the like.
Conclusion:
Media as the fourth principle in the democracy plays vital role in the society were it consists of various principles, ethics and values and also because people believe in media blindly .Before people get information media get information Very soon in recent years people get information in Nano seconds but also they wanted to get information from the official media, there were people have more confidence on media whether it is political issues or social issues Or even gossips people do expect for a correct information.
“Whoever controls the media, controls the mind.”
– Jim Morrison