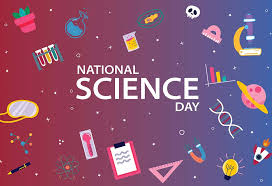 Sir C.V Raman discovered Indian Physicist “Raman Effect” on 28th February,1928. So, this day is celebrated as National Science Day in India. Even for this discovery Raman sir was awarded the Nobel Prize in Physics in 1930.

In 1986 , the National Council for Science and Technology Communication(NCSTC) asked the government to designate 28th February as National Science Day. It was announced by the National Council of Science Museums, an autonomous organisation under the Union Ministry of Culture on its website from that day all over India in all schools, colleges, universities and other institutes, scientific, medical, research centres and technical. This day is celebrated in a greater way not only in institutions or schools but also through Radio shows, TV, Science movies, Public speeches and also Science exhibitions are held based on themes and concepts even debates, quiz, lectures, competitions and science models activities are done. On 28 February, 1987 first National Science Day was celebrated on that day NCSTC announced the institution of the National Science Popularisation awards for recognizing outstanding efforts in the area of Science and Communication.

Objective of the day

India has seen growth in science and technology fields. So, the National Science Day is celebrated to give more opportunity and encouragement to the people who are interested in science and have the mindset to do something in science. In the growth of a society science and technology is the main thing but many people don’t understand the importance of this day. Messages are spread to people about how science is important on a daily basis of your life. Even people get to know about the famous people who have achieved in the field of science their efforts, activities and achievement are displayed. Also on this day new upcoming projects, issues and implementation related to science and technologies are discussed for the development in the field of science.

From the year 1999 on the National Science Day it is celebrated under various themes and this year 2022 the theme of the National Science Day is “Integrated Approach in Science and Technology for a Sustainable Future”. So, every school, colleges, universities and other educational institutions and also other mediums like Public speeches, Radio, Science exhibitions, debates, competition and quiz all the various programs will be held related to this theme.