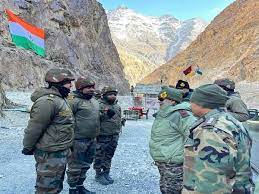 Northern Command-in-Chief Lt Gen Upendra Dwivedi on Visits Galwan
Valley
New Delhi, February 21, 2022: Lieutenant General Upendra Dwivedi, Northern Army Commander visited the Galwan Valley, furthermost areas of the Eastern Ladakh with China on Monday, February 21, 2022 to check the security situation along the Actual Line of Control(LAC) where both the troops got engaged in clash in 2020, June.
Lt Gen spoke about the excellent performance of the security force and appreciated their operational moves towards the advancing threat embodiment to the places the Northern Command officers visited. They decided to not to name the places for skintight security reason.
The Chief of Northern Command was seen talking with the troopers and officials from the Dogra Regiment with the tricolor National Flag flying in the background. The confirmation of the skirmishes between the Indian and the Public Liberation Army of China in 2020 June came into surface, where both ends underwent huge casualty rates where 20 Indian soldiers
and personnel laid their lives.
Lieutenant General Dwivedi took charge on 1 st February 2022. He also stated that equal observation has been going on about secrets and other cross border issues in the Western border with Pakistan, as well.