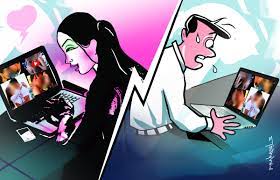 What is Online ‘Honey trap’ scams?
‘Honey trap’ is mostly used in British English to refer to the strategy of using attractive people to entrap or get information from
someone. sweet talks and video calls with strangers on social media being used to honey-trap people comes to the fore. The
term ‘honey trap’ was first used in the world of espionage, and now it is frequently used in the world of journalism.
The world have used sex to encircle people and get access to valuable information. Some years ago, MI5 released a memo
warning British banks and businesses against the threat of Chinese ‘sex peonage’.

Where did ‘Honey Trap’ starts ( HISTORY ) During World War II, Salon Kitty, a Berlin brothel, was used by the German
intelligence service for espionage. Before the fall of the Berlin Wall, East Germany recruited men to seduce women in
important positions in West Germany. The story of such ‘Stasi Romeos’ is well documented in Marianne Quoirin’s book,
Agentinnen aus Liebe . The Soviet Union had a school called State School 4 in Kazan, south east of Moscow, which was used to train officers in the art of honey trapping .

STATISTICS :According to police data shows that while the most common cyber crime is still based on online finance issues, fraud with 1,122 complaints, Facebook-related cases of cheating are third on the list with 181 complaints, next only to internet fraud with 183 complaints. Email frauds accounted for 75 cases, and 70 complaints were related to WhatsApp fraud.
HOW ONLINE ‘HONEY TRAP’ WORKS?
There are two ways of trapping individual people through online. The first is through a social media profile, by infecting their lives and devices. The second is to find someone on adult sites and inject malware into their phones and computers. According to reports, three of the world’s 20 most visited websites are pornographic-related sites. It is important to note that 25% of all Android malware is porn-related. Porn-related Such an effort can lead to long periods of blackmail and information-sharing
sometimes it is a one-off intelligence grab. Due to drastic Increase in such type of cases, the Indian government to ask Indian
Army soldiers to remove 89 apps including Facebook and Instagram from their phones. Including 15 dating apps like Tinder, Truly Madly, and Ok Cupid because The Army describes honey-trapping as a weapon of being waged by its enemies.
The Navy has an investigation called Operation Dolphin Nose to track down personnel being honey-trapped. Inspector Anand Kumar officer of DLF-5 cyber crime police station, said, “The modus operandi has changed from lottery and phishing email scams to targeting people, typically middle-aged women, through Facebook messenger. They establish trust
by chatting over a few months.” “The accused look for profiles of women in the 35 to 45 years age bracket. They befriend them, and later ask for money by weaving a fake story. The initial point of contact is Facebook messenger. Later, they share local mobile numbers, whose SIMS are registered under fake names, making it difficult for us to trace them,” said head
constable Naveen, investigating officer in a recent case of online fraud. The number of honey trap cases has
increased exponentially since the pandemic broke out, says
TRUE INCIDENT: Chikkamagaluru police have arrested 13 people including six women was charges of involvement in a honey-trap case. The accused had extorted money from a person by uploading private pictures in media of him and making it viral . The police arrested 13 people and seized ₹40,670 in cash, three cars, an autorickshaw, a two-wheeler, 17 cellphones and 24 sim cards from them. The police received a similar complaint from another person on August 14. The accused
took ₹75,000 from him as well.

“People are more lonely and hence more vulnerable. During the lockdown, people were trapped at home and spending more
time online,” explains Akancha Srivastava, founder of Akancha who describes her campaign as ‘India’s largest social impact
initiative against cyber harassment’ While both women and men fall victim to in most cases, the offenders are women
and victims are men. People across all age groups are at risk.
“Elderly women feeling lonely and younger people looking for relationships are both vulnerable,” says Akancha. People have to be more careful about who they meet online. “If a random person on the road asks for your personal information or bank details, you wouldn’t give it away. So, why would you do that online?” she says.
If a person is getting too friendly too fast, then take a step back, she advises. Let us listen to , Criminal lawyer Siji Malayil
says honey trapped people compromise with the blackmailers, fearing loss of reputation. This, he says, is also the reason
why it has become such a widespread crime today.
How can we get justice, Criminal lawyer Siji Malayil Says that :- The smart thing to do would be to register a complaint.
Even if blackmailers use a fake identity online, the police can track them down. Once identified, they can be charged with
fraud, cheating, impersonation and extortion. They face up to 10 years of imprisonment. “This is, however, a bailable offence,” he says. However, if the culprit is not in the city, the case may not proceed too far as the police jurisdiction ends.

“Victims need to, nevertheless, pursue legal action. Collect evidence,” the police officer suggests.
Conclusion:-
Honey trap involves men and women where sadly men becomes easily a victims and women as offender . They seduce a
particular person in any other form of Romantic Relationship by sweat talks or by having personal relationship the cause of
this that to get the information and blackmail them with the private photos as they demand them to give money,
bungalow ,car or other things something else. Hence it is our responsibility not to get into those fraudsters hands and into that
vulnerable traps, try not to engage too much in social media , not to attend unknown number video calls try to give
information to the police if you’re trapped so that it is easy to take action immediately we should try to spend your valuable time
with your family and also to engage our self in other tasks.