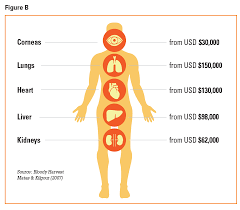 Organ traffickers profit in the shadows, while their destructive medical footprint is the only thing that is felt. It leaves vulnerable populations, aka “donors,” and first world beneficiaries, aka “recipients,” open to severe exploitation and a lifetime of health consequences.

This form of illicit trade also leaves the private sector, in particular the financial industry, susceptible to being an unknowing conduit for its facilitation. Although, with the right training and raised awareness, financial institutions may play a pivotal role in unmasking organ traders by way of the financial trail they leave behind.

When describing organ trafficking, there is often confusion as to how this crime can happen. Global Financial Integrity (GFI) estimates that 10 percent of all organ transplants including lungs, heart and liver, are done via trafficked organs. However, the most prominent organs that are traded illicitly are kidneys, with the World Health Organization (WHO) estimating that 10,000 kidneys are traded on the black market worldwide annually, or more than one every hour.

Once obtained, trafficked organs can be transplanted to recipients in the most reputable of hospitals in major cities throughout the world but makeshift operating rooms in houses have often been the clandestine locations for such transplants.

Traffickers orchestrate the recruitment of the donor often from a place of vulnerability, and victims are not necessarily properly screened for their qualifications to be a healthy donor. Desperate patients in need of an organ may fall prey to a trafficker who could be posing as a “reputable” representative of an altruistic organ matching organization. Financial exploitation plays a key part in both sides of this scenario. In addition, organ traffickers could also be involved in other forms of human trafficking, such as sex and/or labor trafficking. Cases are emerging where an organ donor may have been a victim of sex trafficking and/or labor trafficking as well as a victim of organ trafficking, creating a multi-level equation of exploitation. The term “transplant tourism” is often utilized in describing this crime, as defined by the Declaration of Istanbul:
“travel for transplantation that involves organ trafficking and/or transplant commercialism or if the resources (organs, professionals and transplant centers) devoted to providing transplants to patients from outside a country undermine the country’s ability to provide transplant services for its own population.”

While it may be difficult for banks to detect financial transactions related to organ trafficking, it is not impossible as there are some indicators available. These red flags could include the following indicators and may be innocuous on their own but when combined, could present potentially suspicious behavior:

In order to effectively combat organ trafficking and also raise its visibility among other forms of transnational organized crimes, it is vital to engage in effective public-private partnerships. The private sector, including the financial industry, can be essential in this global fight.