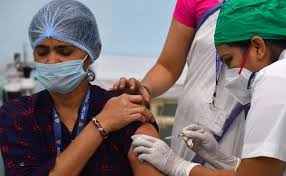 Over 16 lakh healthcare workers have been vaccinated against the deadly coronavirus till now, the government said today in a statement.

Karnataka has the highest number of vaccinations in the country so far with 1,91,443 beneficiaries followed by Odisha and Andhra Pradesh.

After a sluggish start in the first week, India’s vaccination numbers have gradually picked up.

The increase in numbers is also because of modifications made in the CoWin database to allow walk-in vaccinations, i.e those healthcare workers who are not slotted for a certain date can also come and get vaccinated.

On January 16, Prime Minister Narendra Modi launched India’s massive Covid-19 vaccination drive with Covishield and Covaxin. While the former was developed by researchers at Oxford University in collaboration with pharma major AstraZeneca, it is being manufactured in India by Pune-based The Serum Institute of India.

Covaxin is being produced by Hyderabad-based Bharat Biotech which created the vaccine in collaboration with the Indian Council of Medical Research.

In Phase 1 of the inoculation drive, set to be completed by July, one crore health workers followed by 2 crore frontline workers will get the vaccine. In the next one, besides those aged above 50, Prime Minister Modi and all Union and state ministers and lawmakers are likely to get jabbed.

What Made Horizon Zero Dawn So Go January 24, 2021 4:08 pm Nearly 16 lakh people have been vaccinated since January 16, when the mass inoculation drive against COVID-19 was launched, with 10 lakh taking vaccine shots in just six days, a count which is higher than that of countries like the US and the UK, the Health Ministry said today.

The UK took 18 days whereas the US took 10 days to reach the 10 lakh mark, the government said.

15.82 lakh people have been vaccinated in 27,920 sessions so far, of which 1.91 lakh people were vaccinated on Saturday (in 3,512 sessions) alone, according to the Health Ministry.

A total of 1,238 adverse events have been recorded so far which is 0.08% of the total vaccinations, the government said, adding that 11 persons or 0.0007% of the people who were vaccinated have been hospitalised.

The Union Health Ministry on Saturday said that six healthcare workers, who were inoculated, have died so far but added that none of these deaths were related to the Covid vaccinations.

After a sluggish start in the first week, India’s vaccination numbers have gradually picked up with nearly 3.5 lakh healthcare workers getting vaccinated on day 7.