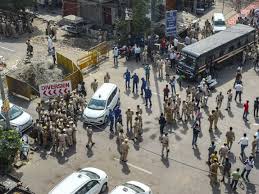 Delhi :On Saturday, communal violence erupted during the Hanuman Jayanti parade in Delhi’s Jahangirpuri neighbourhood, with stone pelting and arson reported. Meanwhile, the Trinamool Congress has agreed to dispatch a fact-finding mission to Jahangirpuri. The TMC’s action is being interpreted as a form of retaliation against the BJP.

In reality, BJP teams have been dispatched to Bogtui in Birbhum district, where nine people were burned alive, and Hanskhali in Nadia district, where a juvenile girl was slain. The girl was allegedly raped by a group. In response, TMC chief and Chief Minister Mamata Banerjee has decided to send a fact-finding team to Delhi to investigate the Jahangirpuririots and bulldozer action matter.

Mamta Banerjee will get the report

According to reports, the six-member party would present its findings to the party’s leader, West Bengal Chief Minister Mamata Banerjee. The crew will speak with local residents and inquire about the occurrence. Kakoli Ghosh Dastidar, Shatabdi Roy, Mala Roy, Pratima Mandal, Sajda Ahmed, and Aparupa Poddar are among the TMC’s six members. On Saturday, there were violent fights between two communities during a procession held in honour of Hanuman Jayanti in the Jahangirpuri area. Let us inform you that the delegation will arrive in Delhi today at 2:00 p.m.

Today, a five-member Samajwadi Party team will arrive in Delhi

At the same time, a five-member Samajwadi Party delegation would arrive in Delhi today to participate in an anti-encroachment drive in Delhi’s Jahangirpuri neighbourhood. MP Shafiqur Rahman Work, former MP Ravi Prakash Verma, MP ST Hasan, Rajya Sabha MP Vibhambhar Prasad Nishad, and former MP Javed Ali Khan are among the members of this group, which will arrive in Delhi at 3 p.m.

Let us inform you that a delegation led by Congress leader Ajay Maken visited the families impacted by the bulldozer action campaign on Thursday. During this time, he arrived in the neighbourhood and attempted to speak with the victims’ families, but they were halted, and all of the leaders sat on a dharna. The Delhi Police, on the other hand, explained their actions and withdrew them from the scene. “Whatever transpired yesterday in Jahangirpuri was illegal,” Congress leader Ajay Maken stated in a press conference. Nobody’s home can be demolished without their permission. He went on to say that the poor were kicked in the stomach.