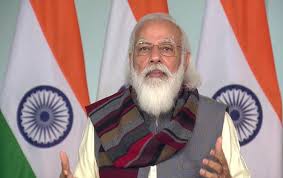 Prime Minister Narendra Modi will release the next installment of the financial benefits under the PM-KISAN yojana on 25th December through video-conferencing, PMO announced on Wednesday i.e. 23rd December

“The farmers will share their experiences with PM-KISAN and also on various other initiatives taken by the government for the welfare of farmers,” it said.

Under the PM-KISAN scheme, a financial benefit of ₹6,000 per year is provided to small and marginal farmers, payable in three equal installments of ₹2,000 each. The fund is transferred directly to the bank accounts of the beneficiaries.

With the push of a button, Mr. Modi will enable the transfer of more than ₹18,000 crore to over nine crore beneficiary farmer families, it added. Mr. Modi will also interact with farmers from six States during the event, the Prime Minister’s Office (PMO) said.

The programme comes in between the agitation by various farmer unions against three farm laws recently enacted by the Modi government. The government has insisted that these reforms are in the interest of farmers.

The PM’s outreach comes even as farmer unions urged the Centre to abandon its stubbornness and take the discussion forward with an open mind and neat intention.  So far, there has not been any headway after five rounds of talks between the government and farmer unions, who have maintained that their demand for repeal of the three farm laws was non-negotiable.

On Tuesday, Tomar urged the farmers to decide on a date for talks two days after his Ministry invited farm unions for more discussion.

Addressing a press conference, representatives of farmer unions urged the government to create a conducive atmosphere for a fruitful dialogue. “Even the Supreme Court has said that suspend implementation of farm laws. This will lead to a better environment to hold talks,” said Shiv Kumar Kakka, National President, Rashtriya Kisan Mazdoor Mahasangh.

Swaraj India’s Yogendra Yadav said the government should not repeat amendments rejected by the farmers but come up with concrete proposals in writing. “Govt is constantly holding talks with so-called farmers’ leaders and organisations who’re not associated with our movement at all. This is an attempt to break our movement. The government is dealing with protesting farmers, the way it deals with its opposition,” he said.

“We urge the govt not to repeat those meaningless amendments which we have rejected but come up with a concrete proposal in writing so that it can be made an agenda, and the process of negotiation can be started as soon as possible,” Yadav said.

“The way Centre is carrying this process of talks, it’s clear that govt wants to delay this issue and break morale of protesting farmers. The government is taking our issues lightly. I am warning them to take cognizance of this matter and find a solution soon,” he said.

Meanwhile, several farmers marked Kisan Diwas the birth anniversary of former prime minister Chaudhary Charan Singh, by paying their tributes at Kisan Ghat while those protesting at Ghazipur border held a havan. Farmer unions also urged people to skip a meal on Kisan Diwas in support of the ongoing protests.