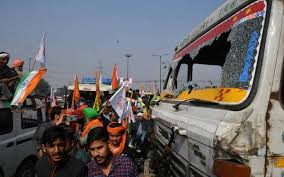 Farmer unions have blamed the violence and mayhem which took place during their Republic Day tractor parades on a conspiracy hatched by the government with one Punjab union, the Kisan Mazdoor Sangharsh Committee, and with Punjabi actor Deep Sidhu, who has previously been linked to the BJP.

The unions have cancelled their plans to march to Parliament on February 1, when the Union Budget will be presented, but have vowed to continue their agitation in a peaceful manner.

Their statements came even as the Delhi Police accused union leaders of instigating farmers to break from the agreed parade route and head towards the Red Fort. The police have filed FIRs naming a number of senior farm leaders who had held talks with the government and who signed an undertaking promising to follow the conditions set for the parades.

“The peaceful farmers parade was a victim of a conspiracy hatched by the government,” said veteran Punjab union leader Balbir Singh Rajewal, who is among those named in the FIR. He alleged that the police had removed the barricades for troublemakers from the Kisan Mazdoor Sangharsh Committee (KMSC) who had previously declared their intention of breaking from the designated route. He also alleged that actor Deep Sidhu, who has been linked to the Rashtriya Swayamsevak Sangh (RSS) and associated with Home Minister Amit Shah and Prime Minister Narendra Modi, was the person who instigated the flag hoisting at the Red Fort.

“It was a historic parade by lakhs of farmers with over 2 lakh tractors, and 99.9% of the farmers stayed peaceful,” added Mr. Rajewal, speaking at a press conference of the Samyukt Kisan Morcha, the joint front of protesting farm unions, at the Singhu border on Wednesday night.

Earlier, two unions which are not associated with the SKM said they would withdraw from the protest. Rashtriya Kisan Mazdoor Sangathan leader V.M. Singh, who was also named in the FIR, said he was withdrawing from the Ghazipur protest site due to the violence on Republic Day and the protesters who unfurled a religious flag at the Red Fort. The Bharatiya Kisan Union-Bhanu, which had filed a case in the Supreme Court on the issue, and was seen as close to the government, also withdrew from the protest at the Chilla site.

Delhi Police Commissioner S.N. Srivastava said farm unions had not followed the terms and conditions laid down for the parades, alleging that farmer leaders made inflammatory speeches and were involved in the violence that left 394 police personnel injured.

He added that a Special Investigation Team was being set up which will question all culprits, including farm unions.

Swaraj Abhiyan leader Yogendra Yadav asked how the police had not been able to control protesters before they entered a national monument. “The question must be asked — who let them in, who opened the gate? We must remember that the Red Fort is guarded not just by the police but by the Armed Forces as well,” said Mr. Yadav, who was also named in the FIR in the list of those who have participated in talks with the government, although he has in fact not been part of the farmers’ delegation in those negotiations.

“It is very clear that the government was very worried by our agitation, which has been carried out peacefully for months,” said Shiv Kumar Kakkaji of the Rashtriya Kisan Mahasangh. He said the government conspiracy had specifically targeted Punjabi farmers, and said that this attempt to separate the Punjab unions from the wider movement would fail.