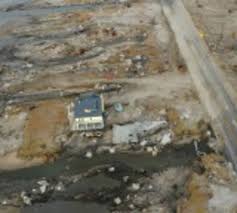 In recent years, from the majority of field experiences, it has been learned that communications networks are one of the major pillars for disaster management. In this regard, the exploitation of different space technology applications to support the communications services in disasters plays an important role, in the prevention and mitigation of the natural disasters effects on terrestrial communications infrastructures.

In general the telecommunication networks have performed well in major earthquakes when compared to the other utilities such electric power, water supply, and transportations since the 1971 San Fernando, California earthquake. The damage to equipment of a central office shut down the emergency service inthe area for days. The awareness of hardening both equipment design and installation spread throughout

the industry. Standard was established by Bell CORE and implemented by the telecommunication service providers.

Mobile communication networks are the pre-eminent way for an affected population to communicate with the world in and beyond a disaster zone. Although utilized before, the power of mobile became particularly evident in the aftermath of the 2010 Haitian earthquake which saw a proliferation of new coordination and response strategies that were built around this platform. The mobile phone and in particular voice calls are people’s primary method of communication in a disaster. As mobile communication becomes ubiquitous and its role in disaster response increases, a renewed commitment to creating robust mobile networks that can support effective communication during this period is essential.

Electric power among all the lifelines usually experience most damage, particularly in substations. The

usual outage is from hours to days. In many occasions, electric power outage impacts other lifeline performance in a post earthquake situation. It is a common practice for telecommunication facilities to have reserve power (battery banks) for short duration outage.It is essential for key telecommunication facilities to have backup power generator for prolonged power cuts.

Electronic equipment requires cooling from an environmental control system to maintain a constant operating temperature to reduce the chance of failure. Some of these cooling systems need water to chill radiators. Underground water tank providing water to the radiator and also acts a

heat sink can be considered as one of the solutions. It must be cautioned that the pump for pumping the water to the radiator must be connected to the back up power generator.

From a network perspective, there are multiple means to maintain a reasonable level of service in an

adverse situation. Establishing a dispersed redundant route will avoid a total disconnect from another facility.