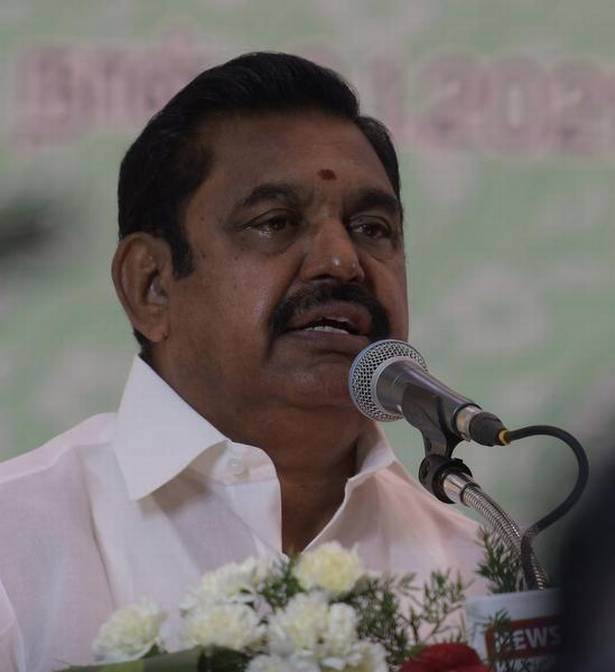 Addressing a gathering in Thiruporur, Chengalpattu district, the Chief Minister referred to Mr. Stalin’s observations in Theni against the Deputy Chief Minister and said that during the days of the COVID-19 lockdown, Mr. Panneerselvam had foot the bill, at his personal cost, for the return of 400 Muslims, who were stranded in New Delhi, to Tamil Nadu and got proper treatment for them. Likewise, he had arranged food for affected people.

Criticising Mr. Stalin for seeking to make political gains by getting “false information” spread through a woman [at the DMK Makkal Gram Sabha meeting in Bodi] Mr. Palaniswami wanted the DMK leader to take on him and his party colleagues directly. “Please do not use innocent people to attack us. The AIADMK is like a fort made of steel. Those who collide with us will only have their heads broken.”

Contending that the AIADMK’s workers, only through hard work, wanted to come up in their lives, the Chief Minister warned members of the DMK that they would not be able “to go around freely by making baseless allegations” against leaders and cadres of his party.

He also came down on DMK youth wing’s leader Udhayanidhi Stalin for making “derogatory remarks” against women. He asked the DMK chief whether he had questioned his son in this regard. “They [Mr. Stalin and Mr. Udhayanidhi Stalin] have no concern for people of the State. Their relentless campaign by making baseless allegations against AIADMK Ministers shows how desperate they are to capture power. The people should teach them a fitting lesson in the Assembly election.”

As for his recent meetings with Prime Minister Narendra Modi and Union Home Minister Amit Shah, the Chief Minister clarified that he had sought the Centre’s approval and funds for a number of schemes and projects. He had also impressed upon them the need for providing compensation to affected farmers of the State.

Listing the government’s work for the Thiruporur assembly constituency, Mr. Palaniswami said seven middle schools had been upgraded as high schools and four high schools as higher secondary schools. Apart from providing 10 Amma mini clinics, the government had implemented a ₹42 crore underground sewerage project and carried out removal of silt from 22 tanks at a cost of ₹13.5 crore.