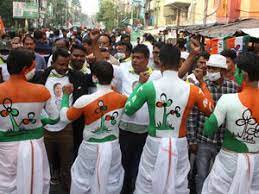 The Trinamool Congress (TMC) has retained the Kolkata Municipal Corporation (KMC) for a third consecutive term by bagging 101 out of the 144 wards, and leading in 33 others, according to the latest updates.
The TMC is leading in 33 wards and has won 101 seats. It now has a clear majority in the KMC. The BJP is leading in three wards, while its candidate Mina Devi Purohit won from ward number 22. The Bharatiya Janata Party (BJP) was a distant second with three seats, while the Congress and the Left managed to win just two wards each.
“During the assembly polls, we have seen the campaign that the BJP had unleashed in the state. Everybody was afraid of it. But the people of the state defeated them. Bengal is a place of communal harmony. What Bengal thinks today, India thinks tomorrow. We will defeat the BJP in the 2024 Lok Sabha polls. It will meet the same fate as it had faced in the last assembly polls,” the Trinamool Congress chief said while campaigning for December 19 Kolkata Municipal election (KMC).
Claiming victory, West Bengal Chief Minister Mamata Banerjee on Tuesday said that people have accepted the party’s work and termed it as a landmark victory. “It is a landmark victory. It has sent a clear message that people have accepted our work. BJP, Left and Congress are nowhere,” she told in the reports.
Interacting with media after the victory, the chief minister said: “This is a victory of the people who have given their mandate in favour of development. This is a victory of development that Trinamool Congress has been continuously doing since its inception to power in 2011”.
“I want to dedicate this triumph to the people of the state and ‘Maa, Mati, Manush’ (mother, land and people – the slogan of TMC). Several national parties like the BJP, Congress, and CPI(M) also fought against us, but they were all defeated. This victory will show the way in national politics in days to come,” Banerjee told reporters outside her residence.
“The beautification of Kolkata has been done. We stay on-ground and don’t fly by night. We will now work for the urban and semi-urban areas also,” she added.
An overjoyed Firhad Hakim, Kolkata Mayor, and State Minister, said, “This is a victory for the people of Kolkata because they established their belief in us.  With huge victory comes more and, more responsibility. The party has called a meeting on 23rd December where the next Mayor will be decided.
Asked whether Firhad Hakim will be the next mayor, a senior Trinamool leader said: “That will be decided by the party. Once the result comes in the leadership will decide the future mayor of the city”.
The party has already started making inroads in Tripura where it contested its first civic polls last month. Speculations were rife that Mamata Banerjee will also visit Meghalaya but a party member pointed out that Ms Banerjee doesn’t want to hold any political talks or programmers during Christmas in the hill state.
TMC national general secretary Abhishek Banerjee also thanked the people of Kolkata for the “huge mandate”. “People of Kolkata have once again proven that politics of HATE & VIOLENCE have NO PLACE in BENGAL! I thank everyone for blessing us with such a huge mandate. We are truly humbled and shall always remain committed in our goals towards YOUR BETTERMENT! Thankyou Kolkata,” he tweeted.
The party has been projecting national ambition since its resounding Assembly poll win earlier this year. The party has been campaigning passionately in Goa ahead of the 2022 Assembly polls.
Written BY : Pragati Upadhyay (Internship Trainee)