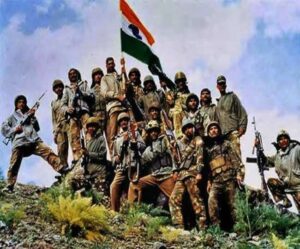 It is celebrated on 16 December every year to commemorate the victory of India over Pakistan in 1971. And on this day Bangladesh was born. Therefore, on 16 December, Bangladesh celebrates its Independence Day every year. The Indian Armed forces secured a decisive and historic victory over the Pakistan army in December 1971 which led to the creation of a nation Bangladesh. Hence, from 16 December, the nation will be celebrating 50 years of the Indo-Pak War also known as “Swarnim Vijay Varsh”. Several commemorative events are planned across the nation.

At the National War Memorial (NWM) an inaugural event will be held in New Delhi which will be attended by Prime Minister Narendra Modi. PM Narendra Modi will light up the “Swarnim Vijay Mashaal” from the eternal flame of NWM on the occasion. Four Victory Mashaals (flames) will be lit from the Eternal Flame of NWM. These Mashaals will be carried to several parts of the country including to villages of Param Vir Chakra and MahaVir Chakra Awardees of the 1971 War. Also, soil from the villages of these Awardees and from areas where major battles were fought in 1971 are being brought to the NWM.

We all pay tribute to the matyrs of our country who laid down their lives for the nation.