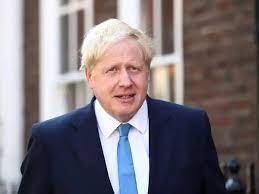 Boris Johnson, the British Prime Minister, said on Thursday that his country has already raised the Ukraine war issue with Prime Minister Narendra Modi on a diplomatic level, adding that everyone recognises that India and Russia have “quite different historical relationships.”

Johnson’s travel to India comes as India maintains a neutral posture on Russia’s invasion of Ukraine, despite accusations from western countries, particularly the United States, that India is not adopting a strong enough stance against Russia.

“Well, we have already raised the issue of Ukraine with Prime Minister Narendra Modi diplomatically. Actually, they (India) were very strong in condemnation of atrocities in Bucha (city in Ukraine),” Johnson told reporters in Halol in Panchmahals district of Gujarat, where he opened a new JCB factory as part his two-day visit to India.

“I think everybody understands that India and Russia have historically had very different relationships, like Russia and the UK had in the last couple of decades,” Johnson further said while replying to a question whether he will raise the issue of India’s stand on Ukraine with PM Modi. “We have to reflect that reality while talking about it (Ukraine) to Narendra Modi,” he further said.

With a 100 million pound investment, Johnson built JCB’s newest factory in India, which would create parts for global production lines. JCB began production in India in 1979 and is currently the country’s top maker of construction equipment, with 11 plants in the UK employing over 7,500 people.

“Yes, I am looking forward to speaking with you. We’ll discuss trade, security, and other important topics “When asked about the agenda of his meeting with Modi, Johnson subsequently told reporters in Ahmedabad.

“It (the trip) has been absolutely fantastic so far and it’s great to be here in Gujarat. Gujarat is a great place and you know that we have a huge Gujarati community which is like a living bridge between India and UK,” Johnson said.

The British Prime Minister stated before his travel to India that the focus of his tour will be on a trade agreement with India.

Johnson arrived in Ahmedabad on Thursday morning to begin his India vacation, and was greeted warmly along the four-kilometer walk from the airport to a city hotel. Later, he went to the Gandhi Ashram, popularly known as the Sabarmati Ashram. He then met with Gautam Adani, an industrialist.

On Friday, he will drive to Delhi to meet with Prime Minister Modi.