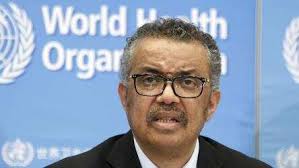 As a new strain of covid virus was detected in the UK and different parts of Europe, India became more concerned about the virus and with full speed they started to look if the virus has accompanied the passengers traveling to India from Abroad, the symptoms of the new strain of virus are not much different from the earlier virus. Scientists became proactive to detect the signs and prepare additional power vaccines which can even protect from its new form and various forms. As of now two new vaccines have been approved to be injected into a large number of people in the country. Mass distribution of vaccines will start soon and the people whose life is at more risk because of this virus will be given priority to balance healthy living of the people. Everyone along with the WHO chief is praising India for the efforts they are making to save people. Let’s see what the WHO chief has to say about the country.

Director-General of the World Health Organisation (WHO) Tedros Adhanom Ghebreyesus on Tuesday praised India’s action and its resolve to end the COVID-19 pandemic as the largest vaccine producer of the world.India continues to take decisive action and demonstrate its resolve to end #COVID19 pandemic. As the world’s largest vaccine producer it’s well placed to do so,” tweeted Tedros.

He also hailed the efforts of Prime Minister Narendra Modi in the fight against the pandemic. “If we #ACTogether, we can ensure effective and safe vaccines are used to protect the most vulnerable everywhere.

India has one of the largest vaccine manufacturing capacities in the world (including the largest vaccine producer – Serum Institute of India) and has secured authorisation to mass-produce the AstraZeneca, Novavax and Gamaleya Research Institute vaccines.With a population of 1.3 billion (and 94 million over 65-year-olds), the domestic vaccination drive will be the largest in the world.The country has a good track record of such drives with masses of the population regularly gaining inoculation for various diseases such as polio and cholera. India”s vaccine rollout will begin in Q1 2021 with frontline healthcare workers and individuals over the age of 50 years gaining priority.The government aims to vaccinate some 250 million people over six-to-eight months.

Union Health and Family Welfare Minister Dr Harsh Vardhan has also given more information on pandemic in the country he also gave glimpse on how country is working for its people,  On Monday said the coronavirus pandemic has turned the clock back by many years and the lockdowns have raised insurmountable barriers and imposed many roadblocks.The Centre has initiated a series of actions to prevent the virus spread and was now taking up the vaccination drive in a big way, he said in remarks that came a day after India’s drug regulator approved the restricted use of COVID-19 vaccines manufactured by Serum Institute and Bharat Biotech in the country.In his address at the 32nd Convocation of city-based Sri Ramachandra Institute of Higher Education and Research (SRIHER) held virtually, he said the pandemic showcased the contribution of the government sector towards adequate healthcare – both Intensive Care and otherwise.He also called for a powerful societal commitment to overcome the barriers imposed by the pandemic.

Acknowledging that COVID-19 has turned the clock back by many years, if not decades, he said the “deadly virus has derailed painstaking efforts of many decades and diverted scientific attention.”

There was a need for mass mobilisation, aggressive campaigns, powerful partners and deep commitments.“And most of all, it needs a powerful societal commitment. Doctors are the backbone of any society. If our doctors are committed, then many things will automatically fall into place,” he said.

Stating that the Centre has initiated a series of actions to prevent the spread of coronavirus, he said Prime Minister Narendra Modi himself has interacted with Chief Ministers of all states and UTs and all stakeholders to regularly understand issues and collaborate with them for effective COVID management.This year, the Centre has already made a substantial increase in the healthcare spend and the Finance Commission has projected a massive increase in the health outlay in the next five years.“The recent pandemic has showcased the contribution of the Government sector towards adequate healthcare…. both intensive care and otherwise. The Central government is taking up the vaccination drive in a big way,” Mr Vardhan said.