WHY FARMERS ARE ANGERY WITH GODI MEDIA 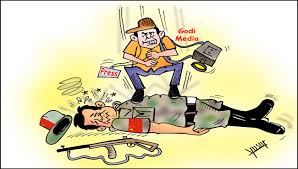 In the last few days our farmers had to go through a lot, their situation can clearly be seen on television, newspaper and social media, it is all over the internet now. Farmers are keeping their demands before the government and they are protesting because of the new Farmers bill that was passed a few months back. Let’s know more about the bill. The borders of Delhi have been witnessing a huge agitation being carried out by farmers, most of them from Punjab and Haryana, they are protesting and blocking the road in large numbers their dissatisfaction with the new Farmers bill is clearly visible.

The farmers are protesting against 2 Farm Bills that the Rajya Sabha recently passed:  the Farmers’ Produce Trade and Commerce (Promotion and Facilitation) Bill, 2020, and  the Farmers (Empowerment and Protection) Agreement on Price Assurance and Farm Services Bill, 2020.The two bills had already cleared the lower house – the Lok Sabha. When they were introduced in the Rajya Sabha, there was ruckus and finally, the Bill was passed through a voice vote.This Bill allows the farmers to sell their produce outside the Agricultural Produce Market Committee (APMC) regulated markets. The APMCs are government-controlled marketing yards or mandis. So, the farmers clearly have more choice on who they want to sell.This Bill makes provisions for the setting up of a framework for contract farming. The farmer and an ordained buyer can strike a deal before the production happens.

The farmers of Uttar Pradesh, Punjab, and Haryana are angry with the provisions of these Bills as they are afraid that these Bills may be the platform that the government (at the Centre) is setting up for the replacement or scrapping of the otherwise robust support system prevalent in their states for the purchase of their crops. They fear that the Minimum Support Price (MSP) guarantee that was their safety net since the Green Revolution of the 1960s kicked in, maybe snatched away from under the pretext of giving the farmers more playing ground and better platforms.

Along with protesting against the government the Farmers are protesting against the media too. The reason is they don’t find the media useful enough to take their protest to the next level. The Farmers are saying the media didn’t cover them during the protest. They also said some powerful media houses have made things worse. It would have been better if they hadn’t bothered covering them. On November 26, when the protesting farmers arrived at the Singhu border between Delhi and Haryana, they were shouting , “Why is the national media not taking notice of us? Do they not see the road blocks? Do they not care about farmers?”

After four days, they had a contrary grievance, articulated through the slogan, “Godi media, go back.”

To understand this let’s know what they mean by saying Godi media.

“Godi media”, meaning media organisations that are “lapdogs” of the Narendra Modi government, is a constant refrain in conversations with the farmers and their slogans. Their anger against sections of the media gained a life of its own when a reporter with Zee Punjabi and his cameraman arrived at Singhu on November 30 to report live on the protest.

There are powerful media houses and they could have done a dignified job of reporting,” Indrajeet one of the farmers said, adding that the farmers are angry specifically with these three TV channels, not all media. “But they have made things worse. It would have been better if they hadn’t bothered covering us.” He also said that there is a growing consensus among protesting farmers to boycott reporters from Zee, Republic and Aaj Tak.

“We aren’t stupid,” he further said. “We have been watching what anchors like Anjana Om Kashyap and Arnab Goswami say about us. We don’t need their help or coverage.”

By 9 pm, the anger towards “Godi media” had reached fever pitch. Appeals were made from the makeshift stage to not hurt or manhandle any reporter, but politely ask them to leave if need be. The Farmers have been asked to have a talk with the government now let’s see what solution the government comes up with, it is also anticipated that few changes can be made in the bill too.