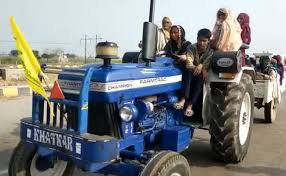 Post the seventh rounds of talk between the ministers and the protesting farmers fails to reach any kind of decision, since farmers are not agreeing to anything expect  they only want government to take back the 3 newly formed farm laws which is not being accepted by the government.

Sources said the government had proposed to discuss the farmers’ demand for a legal guarantee for support price of crops, but the farmers’ union leaders insisted on discussing the repeal of farm laws. The two sides have agreed to meet again on January 8. The farmers have threatened to hold a rally on Republic Day, January 26, if their demands are not met.

This has lead protesting farmers to increase the level of their agitation which was seen in few visuals where few women were trying to drive tractors to lead the rally on 26th january.

1)Republic day- “because it represents the supremacy of the people of India”,

2)Completion of two months of the farmers’ protests.

The Bhartiya Kisan union (BKU), one of the key representatives of the protesting farmers has been teaching the women protesters to drive tractors.

According to reports, more than 500 women are being skilled by BKU to drive tractors, some visuals of the same were out on Monday taking the wheel and others behind them shouting the slogans.

“This is just a trailer. Full movie can be seen on the KMP highway tomorrow,” a farmer leader said as the women practiced.

Farmers will take out the rally tomorrow at the Kundli-Manesar-Palwal expressway in Haryana. Last month, three nationwide protests were held against the contentious laws – Bharat Bandh, a relay hunger strike and protest during Prime Minister Narendra Modi’s “Mann Ki Baat”.

Amid repeated assurances from the government, farmers say the laws will leave them at the mercy of corporates.

Yesterday, the seventh round of talks between the protesters and the government failed to resolve the standoff, which has triggered the biggest agitation in agricultural sector in years. They will meet again on Friday.

The meeting had started with a two-minute silence for the protesting farmers who have died during the agitation, the agriculture ministry said. More than 60 farmers camping at the Delhi border have died, many of them could not survive the extreme weather conditions. “One farmer is dying every 16 hours. It is the responsibility of the government to answer,” farmer leader Rakesh Tikait has said.

While the centre last week agreed to withdraw Electricity Amendment Bill and the penal provisions for stubble burning in the Air Quality Commission Ordinance, farmers have said they want nothing less than the repeal of laws.

Last week, the farmers’ representatives gave a call for a “Kisaan Parade” on Republic Day, their fourth nationwide protest since thousands started camping on the outskirts of the national capital on November 26. Last month, national highways were blocked as a part of “Bharat Bandh”, a relay hunger strike was started, and demonstrators in different parts of the country clanged utensils during Prime Minister Narendra Modi’s radio address- “Mann Ki Baat”.

The protesters said they chose Republic Day “because it represents the supremacy of the people of India”, and also January 26 will mark the completion of two months.

Despite repeated assurances from the government, farmers say the new laws will leave them at the mercy of corporates.

On Monday, Union Minister Narendra Tomar said the laws will be discussed with representatives of farmers’ organisations from other states. “We will discuss these three laws point-by-point and we are ready to make amendments as necessary after considering the points on which you have objections,” the agriculture ministry quoted him as saying.
Written by- Garima Arora