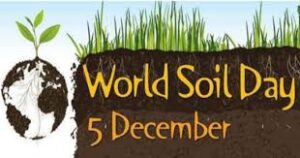 World Soil Day (WSD) is held annually on 5 December as a means to focus attention on the importance of healthy soil and to advocate for the sustainable management of soil resources for a food-secure future. The date of 5 December for WSD was chosen because it corresponds with the official birthday of H.M. King Bhumibol Adulyadej, the King of Thailand, who officially sanctioned the event. Soil biodiversity is under threat. Half of the topsoil on the planet has been lost in the last 150 years, with a staggering 26.4 billion tons of soil lost each year, a rate that is 10 times faster than soil is being replenished. Soil erosion is also a significant yet largely overlooked contributor to carbon emissions.

The best way to celebrate this day is to do exactly what scientists the world over so badly needs to: educate ourselves. An enormous amount of damage is done to the planet every year due not to ill will, but to ignorance—many of us simply do not know enough about the earth to know when we are damaging it, sometimes irreparably. The theme for this year is ” Keep soil alive, protect soil biodiversity”.