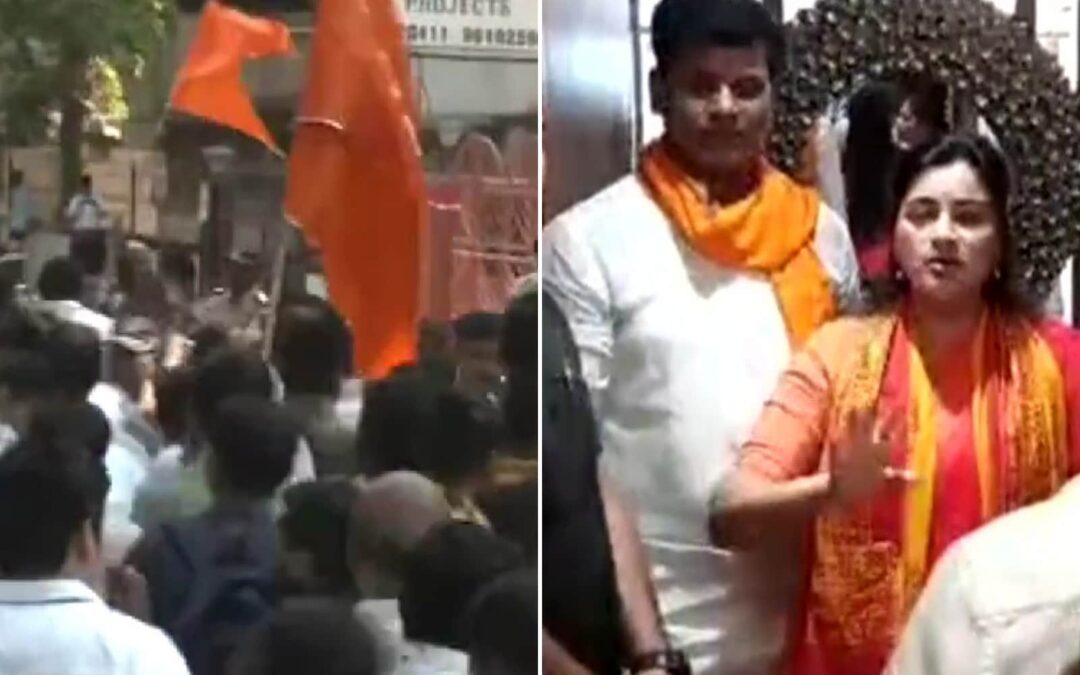 On Saturday, barricades were erected and a team of police officers were visible outside ‘Matoshree.’ This happened just hours before Independent MLA Ravi Rana and his wife, MP Navneet Rana, started reciting the Hanuman Chalisa outside Maharashtra Chief Minister Uddhav Thackeray’s residence.

The pair has faced demonstrations, but they insist they will not be deterred. “The Chief Minister of Maharashtra has ordered Shiv Sena workers to heckle us.” The barricades are being shattered. I’m going to go outdoors and chant Hanuman Chalisa at ‘Matoshree’ once more. As Shiv Sena workers protested outside their residence in Mumbai, MP Navneet Rana said, “CM only understands how to send people in jail.”

Ravi Rana told News18 that Shiv Sainiks had thrown stones at their residence and that they had been “put under house arrest by the police.”

On Hanuman Jayanti, the MLA asked that Chief Minister Uddhav Thackeray read the Hanuman Chalisa to rid Maharashtra of conflicts and bring peace to the state. “During the Covid pandemic, the chief minister did not visit Mantralaya for two years and did not interact with state MPs and MLAs,” “Ravi was recently reported in the TOI.

“We intended to recite the Chalisa for the wellbeing of the state, but the chief minister is against it,” he explained to News18. This would not have happened if Balasaheb had lived today. Those who are Hanuman devotees are backing us up.”

The MLA further said that Maharashtra is suffering because of Maha Vikas Aghadi (MVA) government. “CM is not able to maintain law and order. He’s murdering the constitution. Thackeray should stop the Shiv Sainiks from taking law and order in their hands. The democracy is under threat,” he said.

Shiv Sena leader Anil Desai, who was deployed outside ‘Matoshree’, said, “They (MLA Ravi Rana and MP Navneet Rana) have challenged the law and order situation. They were prompted to do this by someone. Shiv Sena workers are here to protect ‘Matoshree’. Police are taking care of the situation.”

The pair was handed a notice by Mumbai police a day ago, telling them not to disrupt the city’s law and order situation. According to a story in the Times of India, the Ranas requested that the CM chant the ‘Chalisa’ outside Matoshree on Hanuman Jayanti, failing which they threatened to travel to Mumbai and recite it outside ‘Matoshree.’

The pair made the declaration shortly after MNS head Raj Thackeray issued an ultimatum, stating that if mosques’ loudspeakers were not removed by May 3, the party will recite the Hanuman Chalisa outside of them.

According to the story, Shiv Sena leaders responded by warning the Ranas that if they went ahead with their plan, they would face a rebuke from the party’s upper ranks. Hundreds of Shiv Sainiks gathered outside the building shortly after their statement on Friday. Kishori Pednekar, a former mayor, was also seen at Thackeray’s home. “We’ll keep Hanuman Chalisa in front of us while we wait.” She stated, “We’re waiting to teach them a lesson.”

The chief minister arrived at Matoshree on Friday afternoon with his son, environment minister Aaditya Thackeray, from his official house Varsha in South Mumbai, and addressed the throng. Shiv Sena leaders were also present, including MPs Vinayak Raut and Anil Desai.

“Please return home.” Nobody is brave enough to come here. You’ve been here for the entire day. I respectfully urge that you return home “According to Shiv Sainiks, Thackeray said.

“We shall go there (Matoshree) to read the Hanuman Chalisa at 9am,” Ravi and Navneet Rana remarked, unfazed by the police notice. We will work with the authorities. I’ve instructed our employees to guarantee that Mumbai’s law and order is not disrupted.”