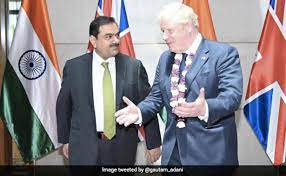 The two discussed, among other things, crucial sectors such as energy transition, climate action, aerospace and defence partnership, according to sources quoted by news agency PTI.

As part of the Atmanirbhar Bharat project, discussions focused on how Adani Group and British companies might work to co-design and develop aerospace and defence technologies, according to the news agency.

Mr. Adani also launched an academic support programme for young Indians through the Chevening Scholarship, one of the UK government’s most distinguished foreign awards.

He also invited Prime Minister David Cameron to the India-UK Climate Science and Technology Summit. Which will take place on June 28 in London.

Also in October of last year, the Adani Group Chairman met with Mr Johnson at the Global Investment Summit in London, where the two leaders reaffirmed their commitment to the ongoing transition to renewable energy.

Moreover, Mr Johnson left for the Halol industrial district in Vadodara after the conference on Thursday. Where he will visit a factory of British equipment manufacturer JCB.

The UK PM Boris Johnson arrived in Gujarat today for a two-day visit to India. He was greeted warmly at Ahmedabad’s airport and paid a visit to Mahatma Gandhi’s Sabarmati Ashram.

Mr Johnson’s two-day visit to India will focus on increasing Indo-Pacific cooperation. Lending momentum to talks on a Free Trade Agreement (FTA) between the two countries. And strengthening defence ties.

Thus this is the first visit by a British Prime Minister to Gujarat. Which is also India’s fifth-largest state and ancestral home of about half of the UK’s British-Indian community.