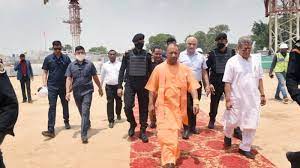 Yogi Adityanath, Chief Minister of Uttar Pradesh, reviewed various ongoing development schemes in Ayodhya on Friday and had dinner with a ‘Dalit’ at his residence.

Mr Adityanath had a meal at the house of one Maniram, a Dalit, on his second visit to Ayodhya since being elected as UP CM for the second time, a government spokesman said here.

Mr Adityanath interacted with Maniram and his family, who live in Ayodhya’s Dalit neighbourhood, after finishing his meal.

He stated that ensuring social justice is his government’s top priority.

The CM had earlier eaten “khichdi” at the home of a Dalit worker of the Bharatiya Janata Party in Gorakhpur on the occasion of Makar Sankranti, according to the spokesman.

While reviewing the development works in Ayodhya worth around 19 thousand crores, he directed the officials, who showed him a presentation titled ‘Ayodhya Vision 2047,’ to complete them on time and with quality, according to the spokesman.

The CM also directed that the Ayodhya vision and development works be reviewed once a week at the district and divisional levels, and once every 15 days at the government level.

The CM called the Detailed Project Report (DPR) on the proposed three paths for devotees visiting the Ram temple in Ayodhya “completely impractical,” and he directed the Public Works Department and other officers to prepare the correct DPR.

Mr Adityanath also visited Ayodhya on April 1 to review the preparations for the Ram Navami fair.

Under Ayodhya Vision 2047, the CM reviewed work on the rejuvenation of eight ‘kunds’ (ponds), as well as their conservation, operation, and maintenance.

He also reviewed surface improvement projects at selected historical sites in Ayodhya, restoration and conservation work through murals and artwork, and work on the Ramayana circuit theme.

According to the spokesman, he reviewed several other projects, including the International Ram Katha Museum and Art Gallery, as well as four ‘Samagra Vidyalayas’ planned for the district.

Mr Adityanath met briefly with the seers and public representatives of Ayodhya who had gathered at the circuit house and urged everyone to work together to further the development of Ayodhya.

During his visit, the Chief Minister also paid his respects at the Hanuman Garhi temple and the Ram Janmabhoomi temple.