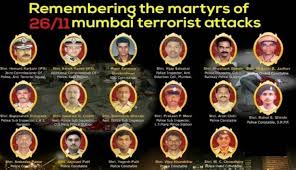 Still today, the frightening pictures of the terrorist attack still shivers the mind of people. On 26 November,2008, many people lost their loved ones. Places like the Taj Bengal, Oberai Hotel, Leopold Cafe, VT Station, etc were victims of terrorists where 170 people were killed in firing and around 300 people were badly injured. The Mumbai attacks were planned and directed by Lashkar-e-Taiba militants inside Pakistan, and carried out by 10 young armed men trained and sent to Mumbai and directed from inside Pakistan via mobile phones and VoIP.

On this day, we pay tribute to all those brave hearts who courageously saved and served the nation. We honour the deeds of people like Karambir Singh Kang, Major Sandeep Unnikrishnan, Hemant Karkare,Vijay Salaskar and so on. We are proud of all those who played a great role in saving and served the nation in tragic times