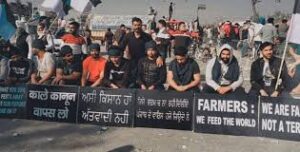 TRAGEDY: A 37-year-old farmer from Punjab died early this morning while protesting at the Delhi-Haryana border due to the cold waves.

It marks 22 days of farmer protests and till date 20 farmers have lost their lives amid cold waves, reported by NDTV.

The reports of the death of 37-year-old farmer, identified as Whim Singh emerged post the news stories of the death of a Haryana priest, Baba Ram Singh who committed suicide and left the suicide note behind saying that he is angered and pain by the government injustice.

The temperature has already declined to 5 degrees or even less in Delhi and the neighbouring cities but it isn’t stopping farmers from protesting and they are ready to fight every obstacle coming in their way.

“We are fighting the cold weather and we will keep fighting the cold, till our demands are met. We will not budge even if it rains,” a farmer said on Thursday at Singhu border, where protesters sat in the open amid biting winds.

They demand for the withdrawal of the three laws or they could also settle for a regulatory assurance that the Minimum Support price (MSP) will continue even if the 3 laws are amended.

“We do not feel the cold. We will stay here until our demands are met,” said a group of farmers told NDTV.

The cold weather conditions are becoming a major problem for protesting Farmers.
Speaking to ANI, a farmer from Kurukshetra said, “When we started protesting the weather conditions were not so harsh but as BJP’s ego is boosting, similarly the weather conditions are also getting harsh. We light up the fire mostly but farmer leaders have made arrangements for gas heaters but even their maintenance is costly. This is a matter of concern.”
“We have all the arrangements including food, blankets, etc. Who are supporting the farm laws are fake people, not farmers. The protest will continue until the farm laws are withdrawn,” he added.
Rahul from Jalandhar, an another protesting Farmer said that the farmers here do not need such facilities, all they want is the farm laws to be withdrawn by the Centre at the soonest.
“We do not need heaters, we have wood logs in stock. We just want one thing, the laws should be withdrawn. We are being provided with washing machines as well. We don’t need anything, we just want to go back home as soon as the farm laws are withdrawn,” he added.

Since a group of volunteers supporting farmers are  coming ahead to help them by donating heaters and blankets.

Despite the extreme weather, families of the deceased farmers continue to send other members to the protest site in Delhi. Baldev Singh, a 76-year-old farmer from Punjab, died of cold on December 8. Now, his son Raghuvir Singh is going to join the protest.

Pal Singh, a 72-year-old farmer from Patiala, died on November 15 at the Singhu border following a cardiac arrest. Pal’s mother, who is 100 years old, said that she is completely devastated that her son is no more. “My son was a true farmer and I miss him a lot. He gave his life for the entire farming community. I am proud of him,” she said.

Keeping the whole situation in note, the Supreme court has issued notice to the centre and the states to form a negotiating committee including the farmer union representatives, government official and stakeholders.