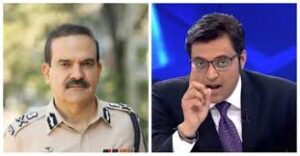 Arrest of journalist Arnab Goswami was big news in the country. This sudden arrest of him was the talk of the town. For a few days it was not clear why he was arrested, the way by which police officers and constables came to his residence and dragged him to the police station made everyone believe that someone is trying to take some personal revenge from him. When the matter came in light the reason given for his arrest was that he got arrested in the case of abutment of suicide which was filed against him in 2018, the case was closed earlier and later it was opened by someone from the family of the person who along with his mother committed suicide.  In 2018 the case was filed saying the person worked for the office of Arnab Goswami didn’t get his payment on time and because of his economic issue he along with his old mother committed suicide.

Opening this case after two years simply shows that how the editor in chief of Republic tv was framed in a false case. After the arrest of Arnab Goswami one news flashed everywhere that he was arrested by an officer who was an   encounter specialist. The encounter specialist is known to use 3rd-degree measures and torturing people in his custody. The encounter specialist was suspended for a total of around 16 yrs and during the suspension period, he was even accused of being involved in extortion cases and even had joined the Shiv Sena. He was reinstated back by Parambir Singh in June 2020 and given the charge of handling the Arnab Case so that Arnab is fixed and the same 3rd-degree measures are applied on Arnab but, sadly the police did not get the custody.

How the situation was going on from the time Sushant Singh Rajput’s suicide case came in Republic TV and Arnab Goswami was personally taking charge of this case and he most of the time telecasted his news and shown failure of Maharashtra government and their involvement in Sushant Singh Rajput’s case that’s why Shivsena who is ruling government in Maharashtra tried to frame Arnab Goswami in abetment of suicide case and tried to torture him the custody. The journalist along with his team tried to express what he went through in the jail through his national news channel and after a few days of custody he was given bail.