BJP at its best in the Hyderabad Election campaign

BJP at its best in the Hyderabad Election campaign 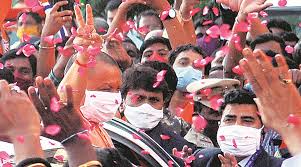 Election Campaigns, Election rallies are something which highlights the motive of a particular political party. During this pandemic, we all were given some guidelines to follow but at the time of the election might be these guidelines are erased or forgotten. We all must have heard about some campaigns, but nowadays BJP’s Hyderabad election campaign is trending a lot. Before this campaign, Hyderabad has never witnessed this level of an election campaign. The chief minister K. Chandrashekhar Rao (KCR) has not even campaigned in the last election. But after witnessing the BJP’s aggressive campaigning, he is also helpless to hold election rallies.

The Greater Hyderabad Municipal Corporation has become the most national importance gained poll. The reason behind this is the campaign joining of the senior leaders of  Bhartiya Janta Party (BJP) from outside Telangana. The notable leaders who have been campaigning for the party are Union home minister Amit Shah, party president J.P. Nadda, Union minister Smriti Irani, Uttar Pradesh chief minister Yogi Adityanath, former Maharashtra CM Devendra Fadnavis, and Bangalore South MP Tejasvi Surya. Not just this on 28 November presence of the prime minister Narendra Modi as a part of the “vaccine tour”  local polls grabbed the extra attention.

Chief Minister of Uttar Pradesh Yogi Adityanath said at an election rally, as some people were asking him about renaming Hyderabad as Bhagyanagar. He said that after BJP came into power in the U.P names of many cities were renamed many of you know about it, Then why can’t Hyderabad be renamed Bhagyanager?

Asaduddin Owasisi president of AIMIM, from his side, said. the fight is between Hyderabad and Bhagyanagar. Now it depends upon people whether they choose Hyderabad or Bhagyanagar.

BJP’s aggressive campaign for the Hyderabad civic polls clearly shows that they want to expand their footprint to the south of Vindhyas. For over 15 years the saffron party has a strong presence in Karnataka, but they have struggled to make their place in other southern states.

However, the BJP significant cause for cheer in Telangana can he the three recent developments. Dubakka earlier which was seen as the TRS home turf. In the recent, by-polls BJP won there.

Secondly, Pawan Kalyan actor turned politician and president of Jana Sena Party has announced his support to BJP for the coming polls to the city civic body. He has a good following especially among the youth this can be a great benefit for BJP.

Lastly, on 26 November senior TRS leader and former chairperson of the Telangana State Legislative council, Swamy Goud joined BJP, because of the BJP’s growing acceptability in the region. All these backdrops will help BJP to increase its chances to create a political footprint in the GHMC polls. In the previous polls, TRS won 99 seats, AIMIM won 44, while BJP won only 4 seats.

The Telangana minister, popularly known as KTR, made the comments in reference to a “polarising” campaign by the BJP that has talked about “a surgical strike on the Old city of Hyderabad” and asked, “why the police do not impose penalties on traffic violators in the Old City

The recent concluded election by the Dubbak assembly seat has energized BJP. Among all the biggest victory was the defeat of the TRS sitting KCR’s daughter  MP Kalavakuntla Kavitha. The BJP candidate Dharampuri Aravind in Nizamabad, Which was considered a safe seat for TRS. Interestingly, D. Srinivas is the father of Aravinda who is TRS Rajya Sabha MP. Previously he was elected as an MLA from the congress party multiple times.