Diwali or Deepavali – also known as ‘Festivals of lights’. Diwali is the most pertinent festival of India. All over the world, the Indian communities celebrate Diwali with great zest and fanfaronade. It is a five – day festival where families get together, events are organised, lights and diyas are illuminated, crackers are burst, gorge on sweet delicacies and give away to festivities. It commemorates the thought of victory of good over evil, light over darkness and knowledge over ignorance.

The term ‘Diwali’ originated originally from Sanskrit word ‘Deepavali’ where ‘deepa’ means ‘lights’ and ‘vali’ means ‘row’, i.e., rows of lights. It is celebrated on ‘no moon’ day or on Amabhasya and according to the Hindu calendar, it also suggests the onset of New Year. It is a five day festival – first day be ‘Dhanteras’, second day is ‘Naraka Chaturdashi’, third day be the most important one which is ‘Laksmi Puja Day’ which continues till fourth day, next day be the day of  ‘Govardhan Puja’ or ‘Balipratipada( Padwa)’ and the last day is celebrated as   ‘Bhai dooj’. Diwali is celebrated in countries like  India, Nepal, Sri Lanka, Myanmar, Mauritius, Guyana, Trinidad & Tobago, Suriname, Malaysia, Singapore and Fiji. It is an official holiday on these countries.

India is diversified in its communities, religion, gender, caste, creed and race. Similarly, history, thoughts, beliefs too differ considerably. There exist several beliefs behind celebrating Diwali of several communities and regions. In North India, Diwali is celebrated on the belief that it is the day of homecoming of Lord Rama after defeating Ravana- the evil from 14 years exile. Western India celebrates the festival as the day of worshipping the deity Lakshmi- the avant-courier of happiness and wealth. Bengal and Eastern India celebrates it by venerating Goddess Kali.

Diwali is celebrated by illuminating the whole house by lights and beautiful diyas to commemorate the day with festive exuberance. The lights signify the destruction of inner evil of human – lust, violence, greed, bigotry, and suffering. Rangolis are drawn all over the houses. Houses are clean and washed and then decorated with various decorations. These are the days of hubbub of happiness and joy. Sweet delicacies are made and offered to the guests. Fireworks and crackers are burst till heartfelt wishes. It is a scenic beauty which is spectacular when fireworks are lit which worth the day. Gifts are exchanged between friends and families with the motive of wishing the other good will and success. Prayers are offered to ganesha and lakshmi all over the world.

Diwali celebrations are loud and vibrant. It is celebrated every year with great enthusiasm. Not only Diwali is now confined to Hindu or Indian culture, but it has been adhered by several other countries like US, Australia, New Zealand. Diwali unites all. It is everyone’s festival because it is the festival for truth, good, and happiness. Diwali not only means burning candles, eating sweets or exchanging gifts. It signifies the rediscovery of one own inner self. This festival is illuminated with such luminescence that there is no place for darkness or evil to exist. It symbolises to bring positivity, happiness, hope, prosperity, love and success.

Wishing everyone a very happy and prosperous Diwali. 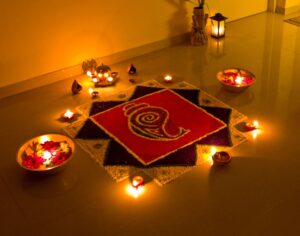