Farmers’ union will meet to decide whether to accept or reject talks offer from the center: 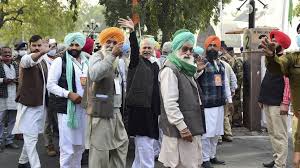 Farmers’ unions will meet on Tuesday to make a decision whether to accept or reject the Centre’s fresh talks offer.

Meanwhile, their umbrella body planned to protest in Mumbai as part of their ongoing agitation to repel the 3 farm laws.

A reply to the Union agriculture ministry’s letter, sent to 40 farmers’ unions late on Sunday night, is also expected to be finalised in the meeting.

The ministry had urged the unions to fix a new date for talks according to their convenience while asking for point-wise details of objections raised by stakeholders against the farm laws.

Hannan Mollah, former Lok Sabha MP and member of All India Kisan Sangharsh Coordination Committee, told TOI it would be pointless to go for fresh talks unless the Centre put ‘repeal of farm laws’ on the agenda. He, however, said a decision would be taken by all 40 unions, including 32 from Punjab.

Mollah said, “The ministry’s letter is an attempt to divert attention from the farmers’ key demand of withdrawal of the laws. Other issues can be discussed only after repeal of the farm laws.”

The Centre had sent a draft proposal to the farmers’ unions for certain amendments in the farm laws while identifying eight key issues on 8th December. The unions, however, rejected those proposals, insisting on repeal of the laws.
It is learnt that the farmers’ unions have been consulting prominent lawyers to firm up their reply to the Supreme Court which had last week suggested setting up a committee to find a solution.

Sukhdev Singh Kokrikalan, general secretary of BKU (Ugrahan) said that his union along with the representatives of the Punjab Kisan Mazdoor Sangharsh Committee (PKMSC) has decided not to attend any meeting to discuss the three farm laws.

Government has already been informed that we are not going to accept any amendment. It is not sincere in its efforts,” Dr Darshan Pal, the president of Krantikari Kisan Union, was quoted as saying by The Indian Express. Dr Pal has received the invitation for talks from the government. Another farm union termed the government’s call for talk as ‘time pass tactics.’

Government has given us a five-page letter that only describes things that happened in the previous meeting. This is nothing but time-pass tactics. Representatives of various unions will meet today to decide the next step,” Jamhoori Kisan Sabha general secretary Kulwant Singh Sandhu said. Sandhu is among 39 farm leaders who have been copied on the letter from Centre that was addressed to Pal.

Expressing his view on the Centre’s letter, Shiv Kumar Kakka, national president – Rashtriya Kisan Mazdoor Mahasangh, said that it clearly indicates that the government is just indulging in formality and does not want to call a meeting. “It is not at all serious to hold the next round of talks with farmers’ union. If this is not the case, it could have categorically mentioned the date and venue just as it did earlier,” Kakka said. He added that Samyukta Kisan Morcha, an umbrella body representing 40 protesting unions, will take a final decision on a response.

Sukhdev Singh Kokrikalan, general secretary of BKU (Ugrahan), told The Indian Express that his union along with the representatives of the Punjab Kisan Mazdoor Sangharsh Committee (PKMSC) has decided not to attend any meeting to discuss the three farm laws. However, the All India Kisan Sangharsh Coordination Committee (AIKSCC) in a letter to the Agriculture Ministry said that they never refused to be part of the discussion.