On 30th October, a horrendous commotion took place which ashamed and alarmed the city of Nice in France. In the Mediterranean city of Nice, a knife attack took place where the attacker killed three people. The attacker strangled one by slitting the throat and several others are injured. The French anti- terrorism prosecutors are investigating the shocking incident. The attacker was identified as a 21-year-old Tunisian migrant, Brahim Aouissaoui.

French president Emmanuel Macron described the incident as an ‘Islamist terrorist attack’. The assailant, Brahim Aouissaoui, was a migrant who arrived on the Italian island of Lampedusa in late September. The authorities have put him to quarantine for several day before they permit him to leave. According to the sources of AFB agency, he arrived in France in late October.

The French authorities took a 47-year-old man in custody for investigation on the grounds that the man was in contact with the attacker. The attacker was shot after the incident by the police and is hospitalized in a life-threatening condition under the surveillance of police.

According to the investigations obtained, the incident so took place was that on Thursday morning, the attacker entered the church premises and attacked 55-year-old women who worked at the church. He cut her throat and her body was found inside the Basilica of Notre – Dame and another old man of 60 was nearly dissipated. He also stabbed a 44-year-old woman who fled for saving her life but eventually succumbed to her injuries.

After the incident, the president of France ordered to increase the surveillance of the churches. Several clues on the investigation are on the table and France was in the state of shock. Various protests and gatherings are taking place. Let’s us hope that the investigation be fruitful and justice be given. 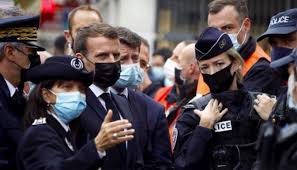