From today farmers will go on Hunger strike. Also during the time of Mann ki Baat program farmers will ring plates 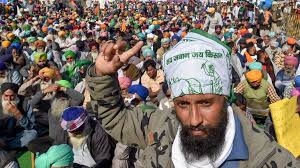 Farmers who feed the whole nation have decided to go on hunger strike, from the last 26 days farmers are protesting against agriculture laws, as the government has assured this law is for the betterment of the farmers but still, there are some demands of the farmers which are not being fulfilled. In these chilled winters farmers are protesting for them as well as for their colleagues.

Farmers’ Protest against Agricultural Laws continues on 26th day and from today, protesting farmers will go on hunger strike. In support of the moment along with the hunger strike Bharatiya Kisan Union has decided to free all toll plazas in Haryana on 25, 26, and 27 December.

11-11 farmers will go on a hunger strike at every protest venue.

Farmers have announced to go on a hunger strike from today (Monday) in protest against agricultural laws. He has said that a 24-hour hunger strike is going to start at all the protest sites and 11-11 farmers will go on a fast on every demonstration site. Along with this, all the farmer’s organizations have appealed to people not to take a one-time meal on the occasion of Farmers Day on 23 December. This was all about the protest but is it going to benefit the farmers? Does this government change their decision? There is a big question mark among the farmers and the people across the country.

Ringing of utensils will be done during Mann Ki Baat.

Farmers supporting this law have decided to take out tractor rallies.

In the midst of the agitation of farmers’ organizations against the new agricultural laws, there are many organizations that are continuously supporting these laws. On the Sunday, farmers associated with Hind Mazdoor Kisan Samiti of Meerut also took out a tractor rally from Meerut to Ghaziabad. After this, these farmers reached Delhi (Union Agriculture Minister Narendra Singh Tomar) Met and gave a memorandum in support of all three agricultural laws. Handing over the memorandum, the farmers of the committee said that this law will further help the farmer to strengthen. Along with the support of agricultural laws, these farmers also asked the Agriculture Minister to make tubewells free for farmers.

Organizations have involved in the movement have expressed their displeasure over the fact that the farmers’ movement received foreign funds. Bhartiya Kisan Union Ugrahan, one of the largest farmer organizations in Punjab, has expressed its displeasure at the Central Government seeking information about the organization’s registration. Chairman Joginder Ugrian and its general secretary Sukhdev Singh have said that the Center is using all tactics, as their sole aim is to defeat the ongoing movement.

In fact, registration of any organization receiving donations from foreign countries is mandatory. The president of Kisan Ekta Ugrahan said that he has been sent an email from his bank in Punjab, stating that for the donations received from abroad he will have to give information about the registration of his organization. He alleged that the central government was creating obstacles to thwart the farmers’ movement.