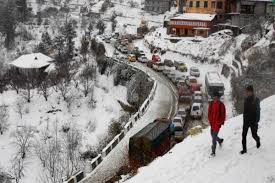 As news of the snowfall spread, tourists flocked to Shimla, known for the imperial grandeur of its buildings that were once institutions of power when the town served as the summer capital of British India.
The landscape in Shimla will stay this way for two-three days, an official of the Met Office said.
The Met Office said western disturbance — a storm system originating from the Mediterranean-Caspian Sea region and moving across the Afghanistan-Pakistan region .
The timely snowfall has brought cheers on the faces of hoteliers.