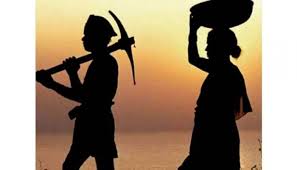 Chaudhary Charan Singh was born in a peasant family at Noorpur, Meerut in 1902. He recognised and felicitated the significance of agricultural economy and the position of a farmer in the economy.

Chaudhary Charan Singh always believed in simplicity and lived a simpler life. He has authored several books on the issues of Indian farmers and has also suggested solutions for them.

The Indian government has recognised his contribution and has honoured him several times.

Why is Kisan Diwas different this year?

This year, Kisan Diwas is being observed amidst farmers’ protests against the Centre’s three contentious agricultural reform laws. Farmers believe the laws will promote private investment in the agriculture sector. Several also fear the deregulation will end up hurting small and poor farmers by weakening the government’s Minimum Support Price (MSP) system.

Addressing a press conference last week, farmer leader Rakesh Tikait urged people to support farmers by not cooking lunch for a day on Kisan Diwas. On Monday, farmers observed a day-long relay hunger strike at protest sites in Delhi, including at the Singhu border.

This year, the day comes amid the ongoing protest of the farmers which is moving from strength to strength. Farmers will skip a meal today in a symbolic protest.

The Centre-farmers’ talks hit a roadblock after the fifth round of talks as the farmers said they want complete repeal of the three farm laws. Unless the Centre concedes, there will be no further talks, agitators said. Union agriculture ministry has invited the farmers for the sixth round of talk the date of which will be decided by the farmers.

“Today, on the occasion of Farmers Day, I greet all the contributors of the country. They have provided the country with food security. Some farmers are agitated about agricultural laws. The government is talking to them with full sensitivity. I hope that they will withdraw their movement soon,” Rajnath Singh tweeted.

Reiterating that the farm reforms won’t harm farmers, Rajnath Singh wrote, “Chaudhary Charan Singh wanted the income of farmers to increase, their crops to get remunerative prices and their honour to be protected. Prime Minister Narendra Modi drew inspiration from him and took several steps for the welfare of farmers. He will not let the interests of farmers to get hurt.”

“Former Prime Minister Chaudhary Charan Singhji was a pioneer among the farmer leaders of the country. The country will always remember his contribution,” Rajnath Singh wrote.

The profession of farming began around 12,000 years ago with the domestication of livestock as hunter/gatherers settled down and started to plant their own food. In short, farming is one of the oldest jobs around. So let‘s take a moment to give some love to all the farmers who work tirelessly to feed us year round.