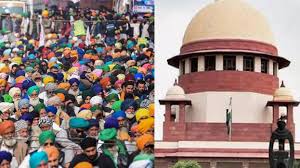 Supreme court, on Wednesday i.e., 16 Dec 2020 issued notice of removal of the farmers from the borders, protesting against the three newly enacted farm laws Farmers’ Produce Trade and Commerce (Promotion and Facilitation) Act, 2020; Farmers (Empowerment and Protection) Agreement on Price Assurance and Farm Services Act, 2020; and Essential Commodities (Amendment) Act, 2020, they are protesting since 26th November 2020.

They demand for the withdrawal of the three laws or they could also settle for a regulatory assurance that the Minimum Support price (MSP) will continue even if the 3 laws are amended.

The government says that these 3 new farm laws are major reforms in agriculture sector that will allow farmers to sell anywhere in the country and that would remove middlemen.

To this whole matter of farmer protests on the several borders of the national capital Supreme Court, comprising a bench of Justice S A Bobde, and justices A S Bopanna and V Ramasubramanium,has finally issued notice to the Centre and the state for the removal of the farmers by forming a negotiating committee comprising of the representatives of the government and the farmers unions to solve the matter.

The Solicitor General, Tushar Mehta has been told to set up a committee including the representatives of farmers unions of India, government and the other stakeholders to solve the issues.

Post forming the negotiation committee the matter will be heard in the Supreme Court tomorrow i.e. 17 December 2020, Thursday.

SG, Tushar Mehta assured the bench that government is not doing anything against the interest of farmers.

Meanwhile, many pleas have been filed in Supreme court directing the authorities that how the farmers protesting on the several borders of Delhi is causing hindrance to the commuters passing by and also adding to the risk of the increasing covid 19 cases.

One of the petitioners, Rishabh Sharma, contended that “since the virus is spreading rapidly and the cases of Covid are increasing day-by-day in Delhi, it is paramount that this protest be stopped immediately”.

He demanded that the Delhi borders should be opened and protesters shifted to a designated place where they should follow norms, including physical distancing, to check the spread of Covid.

The petitioner contended it’s “very necessary” to remove the gathering as it blocked roads for all the emergency/medical services needed to stop the increasing spread of Covid.

Many people were frequently travelling to Delhi from different states in order to get treatment in big government hospitals situated in the capital, Sharma pointed out.

He submitted “that life of lakhs of people protesting at the Delhi borders is under immediate threat since the virus is very contagious and if by chance the coronavirus takes the shape of community spread, it will cause havoc in the country”.

Sharma sought “immediate intervention” of the top court to restrict the mass gathering of people at a particular place.

The petitioner said Delhi Police allowed protesters to hold demonstration peacefully at Nirankari Ground, Burari, in north Delhi, but despite that they blocked the borders of Delhi, preventing people from using roads.

He added that covid-19 has been declared Pandemic by the World Health Organization and according to the guidelines said by the government only 50 people are allowed together at a single place but now lacs of farmers are coming together to protest which is Against the rules set by the government.

“This will soon become a national issue and with government, it won’t work out seems” bench told the SG therefore it is important to form negotiating committee.

“All of you sit together. Prepare a tentative list of committee members,” the CJI said posting the matter for Thursday.